Duck Soup (1933) is the movie most die-hard Marx Brothers fans will name as their favorite Marx Brothers movie. For years it was mine. It seems like the climax of the best phase of their movie career, their early years at Paramount, with the zaniest script and songs (by Kalmar and Ruby), the biggest pretensions toward satirical meaning, and a director at the helm who himself was a comic auteur Leo McCarey, shaper of the early cinematic work of Laurel and Hardy, and then later director of a long list of classics. The film also reunites the team with Margaret Dumont, magical foil from their first two films. 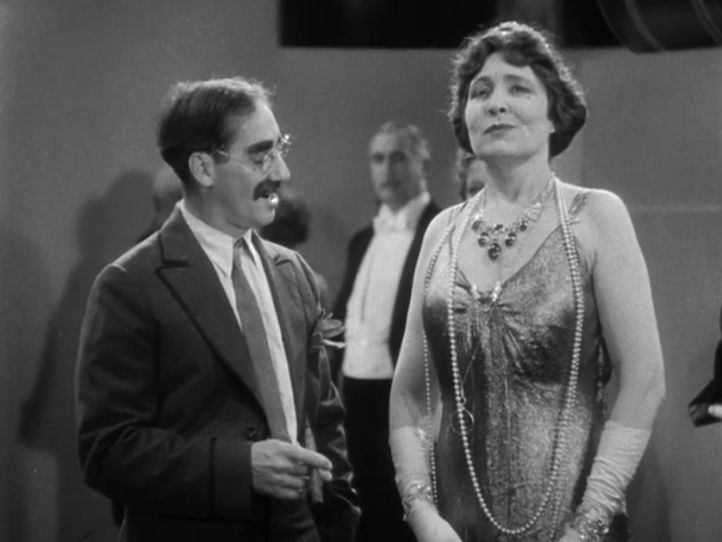 Dumont plays Mrs. Teasdale, a wealthy philanthropist in the fictional European nation of Freedonia. She agrees to lend a large sum of money to her struggling government, but only if they name Rufus T. Firefly (Groucho) their President. The problem is that Firefly is insane. He seems determined to have a war, using tiny slights by Ambassador Trentino (Louis Calhern) of nearby Sylvania as the pretext. It just so happens that Trentino is a spy with malevolent intentions. But if Firefly knows it, it is only at the level of instinct. Mostly, he just likes to make crazy shit happen. His confederates are Chicolini, a peanut vendor (Chico), and Pinky (Harpo). Zeppo is busted back down to a secretary role as in the team’s first two features.

Gone completely is ANY semblance of a romantic sub-plot with two lovers, no doubt one reason the film is so much cherished by comedy fans. Unfortunately, the fact that Duck Soup didn’t do as well at the box office as the smash hit Horse Feathers would later be used as an argument that the team needed to restore those boring romances to their films. In many of their later movies, the Marx Brothers would sometimes seem to be playing second fiddle to this inferior element, making fans pine for the glory days of Duck Soup.

When I was a kid I could not for the life of me fathom why 1933 audiences might be less enthusiastic about Duck Soup than their previous and subsequent films. “This world doesn’t deserve to live!” With a much wider exposure to the times now I can better see it. With the benefit of hindsight we are able to look at Duck Soup as a great satire on the arbitrary authority and senseless absurdity of Fascism. Hitler had just come to power. It feels significant. But 1933 was a different landscape. Mussolini and Hitler had been in the headlines for years, and they hadn’t yet committed their greatest atrocities. Thus, the reaction of a lot of critics at the time was essentially  “Meh. So what?” Plus, the zany political satire thing had been done recently at the time, not just the previously mentioned Of Thee I Sing (which the Marxes had considered adapting) but also in movies starring fellow comedians like W.C. Fields (Million Dollar Legs, 1932), Jolson, Langdon et al (Hallelujah I’m a Bum, 1933), Jack Pearl (Meet the Baron, 1933) and Wheeler and Woolsey (Diplomaniacs, 1933). The latter movie had even featured Louis Calhern as a scheming diplomat! 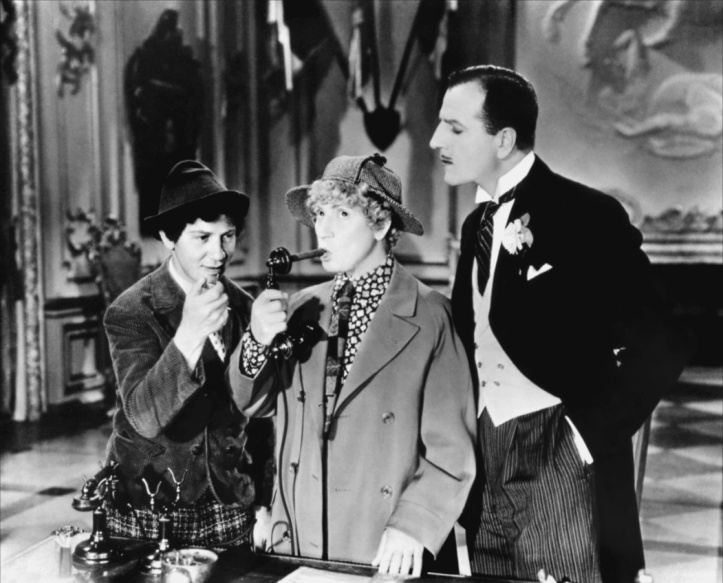 And there are ways in which the Marxes seemed to be repeating themselves in Duck Soup, repeating elements from their previous movies, and even cannibalizing dialogue from their recent radio show Flywheel, Shyster and Flywheel (written by Arthur Sheekman and Nat Perrin). And furthermore, the elements that McCarey contributes are not just the least Marxian elements, but themselves rehashes. The title of the film had already been used for a Laurel and Hardy film. Many of the bits that fans cherish are not Marx specific. The “mirror routine”, had been done countless times before, by Chaplin, Max Linder, Raymond Dandy, etc. The hat business with Chico, Harpo and Edgar Kennedy is old Laurel and Hardy stuff, they did it in half a dozen films. Granted, the team executes these bits expertly and put their own spin on them, but it’s not like it’s new material.

This isn’t to disparage this brilliant film. It’s to explain why, if you were sitting in a theatre in November, 1933, you might have a different perspective on it than we do. Many people found it funny, but no one found it new or fresh.

We of course see its countless virtues. The crazy musical numbers. Groucho’s dialogue, ranking with Animal Crackers as his best. The spy trial of Chicolini, possibly the funniest Chico routine in the team’s cinematic record. The hilarious battle sequence, which outdoes the football game climax of Horse Feathers for sheer insanity. Harpo’s most surreal gag ever, when a barking dog comes out of the tattoo of a dog house on his arm. The recurring gag of Harpo’s motorcycle taking off and leaving Groucho in the sidecar, with the inevitable topper of Harpo on the sidecar leaving Groucho on the motorcycle.

The Marx Brothers had many great moments ahead of them, as a team and as individuals. But 70 minutes of sustained hilarity all in a row like this here? No, sadly, never again. Five movies and that was that.