The Four Marx Brothers in “Of Thee I Sing”? 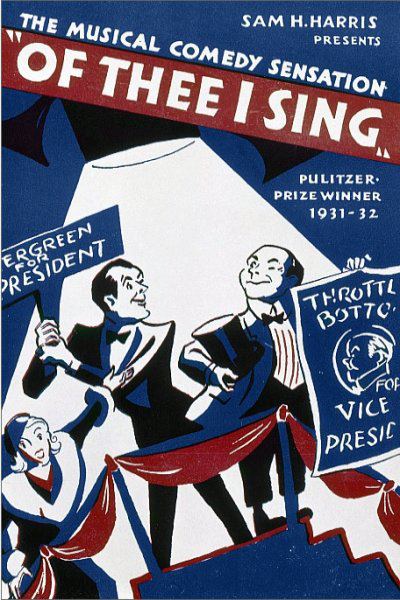 Well, here’s one that never got past the spitball stage but very likely influenced Duck Soup. As their follow up to 1932’s Horse Feathers, the Marx Brothers strongly considered making an adaptation of the 1931 Broadway hit  Of Thee I Sing. This Pulitzer Prize winning musical satire of Presidential politics was written by Kaufman and Ryskind (who’d written the first two Marx Brothers movie vehicles The Cocoanuts and Animal Crackers), with songs by the Gershwins. Horse Feathers had been a a box office success and gotten the team on the cover of Time magazine. But Paramount was having financial difficulty, resulting in a legal dispute between the studio and the team. The Marx Brothers formed their own corporation and talked of making Of Thee I Sing, with Norman McLeod as director. No dough was raised however and the troubles with Paramount were ironed out.

And it’s a good thing, too. If you know the play, this looks like it would have been a case of square pegs in round holes. Who would have played what? President John P. Wintergreen is the obvious Groucho role, but he’s actually more like Zeppo. You can always make up something for Harpo, I guess. And Chico? I guess he represents the crucial Italian vote. At all events, my fear would be that the result would look something like Room Service, the one occasion on which the team did film an existing stage comedy not crafted especially for them. That was a failed experiment.

Not that Of Thee I Sing is without its own heaps of zaniness, clearly a by-product of Kaufman and Ryskind’s having written for the Marx Brothers. And there are certain passages of Duck Soup, in particular the cabinet meeting scene, and Groucho’s opening song (“If ya think this country’s bad off now, just wait’ll I get through with it!”) that clearly seem inspired by Of Thee I Sing. Ultimately, this story remains an interesting footnote, a rare “what if?” that I am content didn’t come to fruition.