A nod today for actor Charles “Charlie” Ruggles (1886-1970). While his brother Wesley had more of a pedigree in silent comedy and eventually became a successful director, Charles became the better known Ruggles, valued as a comic actor in dramas (i.e. the “comic relief”) as well as full-bore comedies. Born in Los Angeles, he started his stage career in 1905, making it to both films and Broadway by 1914. He was in only a handful of silent pictures, making his first significant mark in the New York theatre, in shows such as The Passing Show of 1918, and Battling Butler (1923-1924), which was later made into a film by Buster Keaton. 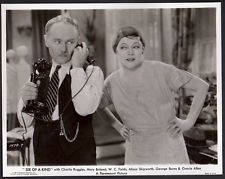 It was the in the era of talkies that Ruggles’ film career took off, and he was generally cast as easily flustered, comfortable-looking middle-aged men. Notable pictures included the horror film Murders in the Zoo (1932); the Lubitsch classic Trouble in Paradise (1932); several pairings with Mary Boland, including the all-star Six of a Kind (1934), the unjustly forgotten and coincidentally titled Ruggles of Red Gap (in which, ironically Charles Laughton plays Ruggles, 1935), and People will Talk (1935), and the performance he may be best known for today, the big game hunter in Howard Hawks’ Bringing Up Baby (1938). From 1949 to 1952 he had his own tv situation television comedy The Ruggles and from then on, his career consisted mostly of guest shots on series television, and stage work, although he would occasionally return to films, e.g. the Disney pictures The Parent Trap (1961) and Son of Flubber (1963).

I’m guessing you’ve seen most of these movies and a good many others that Ruggles appears in, so instead today we will show you a greater oddity, a 1950 episode of his sit com: