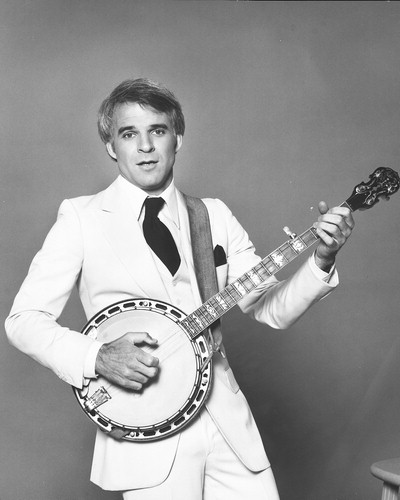 Today is the birthday (1945) of a man who may be the supreme neo-vaudevillian of the late 20th century, Steve Martin. Would this man have headlined at the Palace? Oh yes, I think so. A portmanteau act that included surreal joke telling, crazy dancing, a little banjo playing, balloon animals, and silly props from the joke shop like Groucho glasses and an arrow through the head?

Unfortunately his autobiography Born Standing Up came out a couple of years after No Applause, otherwise I would have definitely incorporated him into my New Vaudeville section, with his background working in hokey melodrama theatres and performing at Disneyland. 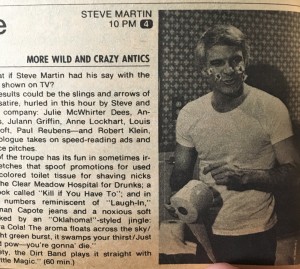 How surreal — and heartening — that he became a comedy rock star who filled stadiums with such an act. I of course worshiped him as a teenager. To his serious fans, his film career (while no doubt lucrative for him) has been a sad disappointment. You could forgive us for expecting something on the order of Chaplin. But, la! There are always memories.

To find out more about  the history of the variety arts, including television variety, consult No Applause, Just Throw Money: The Book That Made Vaudeville Famous.To learn more about slapstick comedy, please check out my book: Chain of Fools: Silent Comedy and Its Legacies from Nickelodeons to Youtube