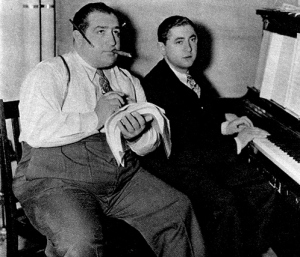 Today is the birthday of Mack Gordon (Morris Gittler, 1904-1959). Born in Warsaw, he moved to New York as a child and broke into vaudeville as a singing comic in the late 20s and 30s. By 1929, his songs were being used in Hollywood films; by 1931, he was also contributing to Broadway musicals. Teamed with partners like Harry Revel and Harry Warren, he wrote or co-wrote over 120 standards, including “I’ve Got a Gal in Kalamazoo”, “Chatanooga Choo-Choo”, “Did You Ever See a Dream Walking?”, “You Make Me Feel So Young”, and “Down Argentine Way”, among countless more.