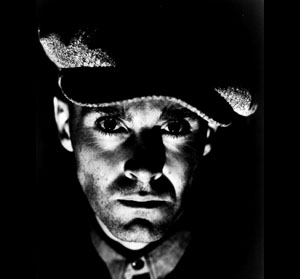 A good day for writers! Today is the birthday of John Steinbeck (1902-1968). Ever since high school The Grapes of Wrath has been one of my favorite books (and also one of my favorite movies). It’s not a perfect work of literature, by any stretch, but I’ve always related this Depression era saga of displaced Oklahoma farm families to my father’s family’s ordeal as Tennessee sharecroppers. And as the Okies went west in search of a better life, my father’s family joined the Great Migration and came north. My mind’s eye pictures the family squeezed into a similar rusty old open-air Tin Lizzie, stuffed with wool blankets, wash tubs, a ration of soda crackers — and far too many humans to be safe on the highway — and I don’t imagine I’m far off the mark.

God, I love this scene in John Ford’s movie version (adapted by Nunnally Johnson). I couldnt find an online clip. But here’s a transcription. Tom Joad’s little monologue feels Shakespearean to me. Shot in the shadows, Joad seems one part Jesus and one part something scary, threatening and ominous. What I especially like, towards the bottom, is Tom’s use of the personal pronoun “I” — his personal resolve to right the wrongs he describes. The Whitmanesque idea of the individual as a manifestation of the collective soul (or as Emerson termed it, the Over-Soul) is what it’s about.

Tom: I been thinking about us, too, about our people living like pigs and good rich land layin’ fallow. Or maybe one guy with a million acres and a hundred thousand farmers starvin’. And I been wonderin’ if all our folks got together and yelled…

Ma: Oh, Tommy, they’d drag you out and cut you down just like they done to Casey.

Tom: They’d drag me anyways. Sooner or later they’d get me for one thing if not for another. Until then…

Ma: Tommy, you’re not aimin’ to kill nobody.

Tom: No, Ma, not that. That ain’t it. It’s just, well as long as I’m an outlaw anyways… maybe I can do somethin’… maybe I can just find out somethin’, just scrounge around and maybe find out what it is that’s wrong and see if they ain’t somethin’ that can be done about it. I ain’t thought it out all clear, Ma. I can’t. I don’t know enough.

Tom: Well, maybe it’s like Casy says. A fellow ain’t got a soul of his own, just little piece of a big soul, the one big soul that belongs to everybody, then…

Ma: I don’t understand it, Tom.

Tom: Me, neither, Ma, but – just somethin’ I been thinkin’ about.