Walt Whitman: Why He is Indispensable 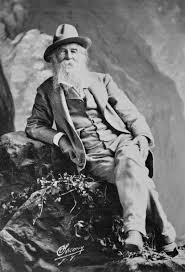 Walt Whitman (1819-1892) has become indispensable to me over the years. It took me a while to embrace him, but once I did I became fully converted. In my youth, I was married to the gratuitous musical effect. At 19, my favorite poet was Dylan Thomas. Among American writers I favored (and to a certain exten still do) Poe and Melville. I am drawn to the archaic and the Gothic. I like Biblical echoes and pyrotechnics. By contrast, Whitman, a journalist by trade, is plain-spoken, more like Twain. Upon my initial attempt to engage, I found him repetitive and (ironically) uninspiringly simplistic.

Anyone who’s read the opening overture to my book No Applause knows that all that changed somewhere down the line; I was definitely thinking about him, not only in that section, but throughout the book. For half my life now, like Shakespeare, Milton and the King James Bible, Leaves of Grass has been something I have read and re-read over the years, a font I periodically return to. I’ll thumb through it and read some random portion just for the benefit of it, like taking a vitamin.

What happened in between? I’d re-read Leaves of Grass again years later, at a time when I was reading a lot of philosophy, and politics, and history, and its virtues registered in that context. You must read the book in its entirety. To read, say, a third of it, you merely think it repetitive. When you plow past that point, that repetition becomes the very point — it is one of the book’s main formal ideas, its prism of transcendence. Leaves of Grass is a poem that touches on and celebrates EVERYTHING. Whitman seems an odd mix of Christ and Nietzsche. There are no fetters on his imagination or his love for what he imagines. I especially find myself enraptured with the impossible nexus he was able to formulate between radical individualism and radical egalitarianism. (Its not without its application to something as apparently quotidian as vaudeville, btw — the self-involvement of the act, and its immolation before the audience, the All). Who can DO that? It is like quantum physics somehow — to explore the self to such a degree that one is exploring the universe, and everything that exists becomes sort of leveled, becomes one. It is a relentlessly positive vision. If Poe is darkness, Whitman (like Emerson) is sunlight. I literally think of sunlight when I think of him.

Also, as the inventor of free verse (or a principal inventor of it), he is one of the first modernists. You see his influence everywhere. This (like his democratic devotion) has its political implications. He is without limit, anarchistic, attuned to nature, and not cowed by any artificial dogma.

Lastly, in fixing to recite some Whitman the other day, I found myself drawn to passages about sex and the body. It may amuse you that I am only lately attracted to that facet of his writing, since for so many others that is the PRINCIPAL, perhaps the ONLY thing to love about Whitman, though as, I’ve said, I clearly find it a more all-encompassing work of art than that. But the politics of this particular moment brought home the importance and wisdom of the corporeal aspects to me. These politicians — they clearly HATE bodies: women’s bodies, men’s bodies, their own bodies. As a consequence, they hate themselves. They hate everyone. This hatred causes them to inflict so much damage on the world. The importance of art in our lives, and the real palpable consequences of lack of exposure to it, these facts of life couldn’t be starker or louder than they are at this moment. And these haters of the body — they would likely tell you, if disingenuously, that they believe instead in the primacy of the immortal soul. But if your soul hasn’t been cultivated to be humane and to treat the world with love, how can it be said to exist?