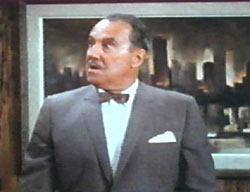 Today is the birthday of the immortal Gale Gordon (1906-1995), best remembered as the comic foil on all the post-Desi shows of Lucille Ball (The Lucy Show, Here’s Lucy, and Life with Lucy). He had also done three guest shots on I Love Lucy, and was under consideration for the role of Fred Mertz when the show was being planned.

Gordon’s real name was Charles T. Aldrich, Jr — his father was a famous quick change artist in vaudeville (to learn about him go here). Gordon got his start in radio on shows like Flash Gordon, Fibber McGee and Molly, The Great Gildersleeve, and Jack Haley’s The Wonder Show, which is where he first met and worked with Lucy in 1938. The two would later perform together again on My Favorite Husband, the radio precursor to I Love Lucy.

And now here he is, as the long suffering Mr. Mooney: