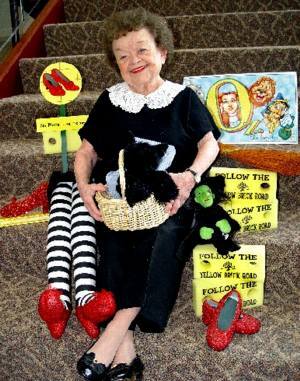 Trained in dance and acrobatics, St. Aubin became a professional entertainer at the age of 13 at the 1933 Chicago World’s Fair. Troupes she performed with include Rose’s Royal Midgets, Fred Roper & His Wonderful Midgets, Henry & Dolly Kramer Midget Troupe, and Nate Eagle’s Hollywood Midgets. In 1946 she played a leprechaun in the movie Three Wise Fools with Lionel Barrymore. In 1947 she was working as an elf in the toy section of a Chicago department store when she met Parnell St. Aubin, one of the Munchkins from The Wizard of Oz (1939), whom she married and opened a bar with. The bar, called The Midget Club, was open from 1948 through 1982. 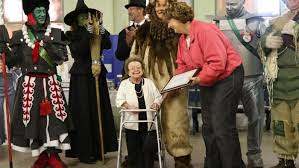 Since the passing of all the little people who played Munchkins, St. Aubin has been in demand at Wizard of Oz fan fests throughout the country as a Munchkin Widow. There are (or have been) such festivals in Indiana, Illinois, Michigan, Missouri (Hannibal), Kansas, upstate New York, and elsewhere. This article from the Indiana festival is where we get the info for this post; read more here.