Fredi Washington: A Life Worth Imitating 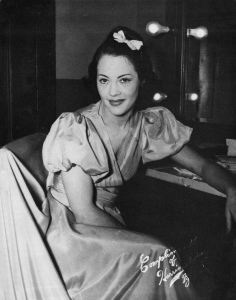 Born in Georgia to bi-racial parents, Washington moved to New York with her family as a teenager, where she took part in the Harlem Renaissance as a performing artist. In 1922 she appeared in a silent film called Square Joe, starring heavyweight champ Joe Jeanette. By day she worked at Black Swan Records, which fueled her aspirations to get into show business herself. With this in mind, she took dance classes with local teachers. It is widely written that she was one of the Happy Honeysuckles in a 1924 production of Shuffle Along, although she is not credited as such on IBDB; this may have been a touring version of the show, which had run on Broadway 1921-22. There she is said to have met with Josephine Baker, who became a mentor to her. She danced at Club Alabam during this period. In 1926, using the stage name “Edith Warren” she co-starred on Broadway with Paul Robeson in Black Boy, a play inspired by the life of boxer Jack Johnson. Next with partner Al Moiret she formed a dance duo called “Moiret and Fredi” which appeared in clubs in London, Paris, and Berlin in 1927 and 1928.

When she returned in 1929 Washington hit the ground running both on Broadway and in the film industry, alternating between both throughout a good chunk of the 1930s. She plays an opium den dancer in The Letter (1929) with Jeanne Eagels, and dances in the Duke Ellington musical short Black and Tan (1929). She’s an extra in the Marx Brothers’ Animal Crackers (1930); because of her light skin she seems to have been booked as a party guest, as opposed to one of the African natives during Groucho’s entrance. She returned to Broadway in 1930 to star in the show Sweet Chariot. This was followed by Singin’ the Blues with her sister Isabel Washington; and Run Little Chillun (1933). In 1933 she married Lawrence Brown, a trombone player in Duke Ellington’s band.

Then it was back to films where she now hit her brief stride. She’s in O’Neill’s The Emperor Jones (1934) with Robeson (for which they reportedly had to darken her skin so audiences wouldn’t think he was making love to a white woman, which was then illegal across much of America). Then came two musical shorts, Mills Blue Rhythm Band and Cab Calloway’s Hi-De-Ho, both in 1934. That same year came the greatest role of her career and the one she remains best remembered for, that of Peola in the original version of Imitation of Life. The film was nominated for an Oscar, but it did not translate into more prestige work for the African American actress. Casting directors have always been myopic — and never more so than the days of the Hollywood studios. Because Washington looked Caucasian, but was part African-American, they wouldn’t cast her as either, and there were very few parts for mulattoes. Her next movie was the 1936 race film Ouanga, followed by One Mile from Heaven (1937) with Bill Robinson and Claire Trevor, her last.

Meantime, in 1936-37 she co-founded the Negro Actors Guild with W.C. Handy, Noble Sissle, Alan Corelli, Dick Campbell and Leigh Whipper. The membership would also come to include Bill Robinson, Ethel Waters, Hattie McDaniel and Lena Horne. Washington was also heavily involved in issues affecting actors of color through the NAACP. But her important advocacy worked didn’t translate into film roles. Rather than wait around for one, she returned to the Broadway stage, where she worked for another decade. She was in Mamba’s Daughter (1939-40) with Ethel Waters, as well as an all-black version of Lysistrata (1946); an Americanized version of Gorki’s The Lower Depths called A Long Way from Home (1948) and a drama called How Long Til Summer (1949). In 1943 she acted on radio in a dramatic tribute to African American women called Heroines in Bronze. Also during the ’40s she was Entertainment Editor for People’s Voice (1942-1948) an African American paper published by Adam Clayton Powell, the first African American elected to Congress, who was married to Fredi’s sister Isabel Washington. She also worked as a casting consultant on Carmen Jones, Cry the Beloved Country and revivals of Porgy and Bess.

In 1951 Washington divorced Brown. Retired from show business, she married a dentist named Anthony Bell and moved to Connecticut where she lived another four and a half decades. In 1959 Douglas Sirk remade Imitation of Life, casting Susan Kohner, a white actress (who was half Mexican), in Washington’s former role. That seems pretty wrong, but also pretty typical.

Many honors and accolades caught up with Fredi Washington during her last years but she never seems tempted to have gone back into show business. And can you blame her? She had every natural gift in the world: brains, beauty, talent, and even critical acclaim — and still couldn’t blast past society’s ignorance and prejudice. But her work deserves appreciation — watch her films if you can!