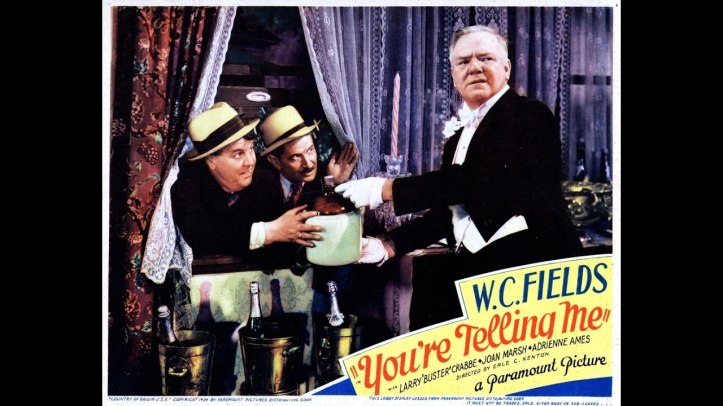 May 18 is the anniversary of the release date of the W.C. Fields’ classic You’re Telling Me (1934), directed by Erle C. Kenton.

This film is notable in being Fields’ first true starring feature of the sound era. He’d starred in shorts, he’d starred in silent pictures, and he’d co-starred or been in ensembles in talkies. But this was the first time he was permitted to carry a feature length talking picture on his own. His career over the next decade or so is proof of the success of that experiment.

Fields, more than any other major comedian we can think of, loved to recycle material, and we almost never mind. You’re Telling Me is a remake of his 1926 silent feature So’s Your Old Man, which was based on a story called Mr. Bisbee’s Princess by Julian Leonard Street. It also revives his famous golf routine, which Fields had devised for sketches in Broadway revues, and had filmed in his 1930 short The Golf Specialist. (To my mind, the vehicle also has more than a little in common with George Kelly’s The Show Off).

In the film, Fields plays a crackpot inventor who has a lot riding on the sale of his latest invention, punctureless tires. When his big presentation to a tire company goes awry he is ready to call it quits, but he is bailed out by a stranger whose life he touched (Adrienne Ames), enabling his daughter to marry into the snobby family of her beau (Buster Crabbe). (This is essentially the spine of his later film You Can’t Cheat an Honest Man as well). Fields get a surprising amount of pathos into this film, more even then his critically acclaimed Micawber in David Copperfield. He was an extraordinarily talented man. Also in the cast: Louise Carter, Kathleen Howard, Dell Henderson, and Tammany Young.

Fore more on comedy film history, including the comedies of W.C. Fields, don’t miss my new book: Chain of Fools: Silent Comedy and Its Legacies from Nickelodeons to Youtube