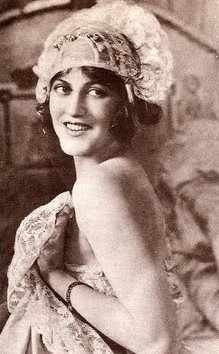 Today is the birthday of Lillian Lorraine (Mary Ann Brennan, 1892-1955). A native of San Francisco, she went onstage at age 14 and was spotted by Flo Ziegfeld in 1907 when she appeared in the Shubert show The Tourists. The following year he cast her in his show Miss Innocence, and she was to be a mainstay of Ziegfeld’s Follies, Frolics and other revues from 1909 through 1920. For a time Z was obsessed with her both personally and professionally, making her the star of his revues (and thus one of the most famous of all the Follies girls), and having an affair with her that ended his marriage to Anna Held. While Lorraine was a legendary beauty, she reportedly was no great shakes as singer, dancer or performer — though Ziegfeld famously showcased her performance of “By the Light of the Silvery Moon” for his 1910 revue.

Starting in 1912 Lorraine began appearing in films as well. Her marriage in 1912 to Frederick M. Gresheimer changed her relationship with Ziegfeld, although he continued to present her in his shows until the end of the decade. Lorraine was of a wild and tempestuous temperament and was constantly getting in trouble and causing scandals. She broke her spine in an accident in the early ’20s, ending her Broadway and film careers in 1922. Vaudeville was the resort of the latter stretch of her career — the opposite trajectory of most people in show business. By the early 40s, she was effectively retired.

To find out more about vaudeville past and present, including stars like Lillian Lorraine, consult No Applause, Just Throw Money: The Book That Made Vaudeville Famous