On the Satirical Genius of Charles B. Griffith (“Little Shop of Horrors”, et al)

Charles B. Griffith (1930-2007) is one of my favorite screenwriters. Almost the entirety of Griffith’s career was spent working for Roger Corman from the mid 1950s through the late 1980s as a screenwriter, 2nd unit director (occasionally as full director), and on a handful of occasions, as an actor.

Perhaps it goes without saying that Charles B. Griffith was no relation to D.W., but he came from a distinguished show biz lineage nonetheless: a grandfather was in the circus, his father was in vaudeville, and his grandmother and mother were stars in radio. (The grandmother was Myrtle Vail. She also had memorable turns in Griffith’s movies).

Griffith was fortunate enough to have some of his spec scripts shown to Corman in the mid 50s and was hired on the spot. Over the course of his career he wrote scores and scores of scripts for the schlockmeister, most of it the typical exploitation stuff, monsters and science fiction, westerns, juvenile delinquent films and so forth. I have only seen a scant handful of these to date, but intend to see more

When we refer to Griffith’s “genius” we are instead talking about his satirical black comedies, of which he only wrote a few, but a couple of them are among my favorite movies and have been enormously influential on me.

My two favorites are A Bucket of Blood (1959) and The Little Shop of Horrors (1960). Both of these films seem to me to have been influenced by Chaplin’s Monsieur Verdoux. I would love to know if it was actually the case that Griffith admired the film, but it sure seems that way in terms of tone, subject matter and structure. These are comedies of murder, and like Verdoux, satires about the temptations of mass murder in the twentieth century, with greed being the primary motive. Bucket of Blood is also a hilarious satire of the art world and the then-contemporary beatnik culture — it’s heavy on “Look, The Emperor Has No Clothes!” comedy. The Little Shop of Horrors is better known today because of the musical adaptation (which I happen to find toothless, dreadful and uninspired compared to the original). But in both cases, human life becomes a small price to pay in exchange for piles and piles of money. 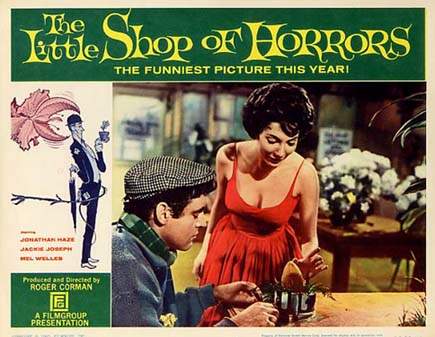 For a long time in my early twenties I was calling The Little Shop of Horrors my favorite film ever, and with only a little bit of nudging I could place it there again. The combination of Borscht belt style verbal humor, Jerry Lewis derived slapstick, the seedy Grade Z horror element, and the be bop soundtrack, it all does something for me. It all smashes together like the tectonic plates that formed the Himalayas.

In 1961, Griffith also wrote Creature from the Haunted Sea (1961), often considered to be part of a trilogy with the other two. I am less enamored of this one, however it packs a great deal of historical interest as it is set in a sort of Bay of Pigs Cuban milieu and features gangsters…it’s a very odd artifact to watch in light of the Kennedy assassination two years later. It also has a sea monster.

Griffith continued directing and writing throughout the next several years (mostly the usual schlock, although he did take two years to try to make a serious movie about the Arab-Israeli conflict that wound up being shelved). The next of his notable black comedies is the incredible Death Race 2000 (1975), co-written with Robert Thom and directed by Paul Bartel, and starring David Carradine about a futuristic hit and run car race, where the drivers all get points for running over pedestrians. Bartel later gave Griffith a small role in Eating Raul (1982).

Now, there are others, Quentin Tarantino among them who will wax rhapsodic about Griffith’s prowess in other genres, such as the car race movie, notable among them Eat My Dust (1976) starring Ron Howard. I will leave that to others. His last new credit as writer/ director was Wizard of the Lost Kingdom II (1989), which I confess is not high on my list of must-see films, as much as I admire Griffith’s satires. In the 90s. He retired from films, mostly traveling and writing books during his remaining years.

To learn more about the history of comedy film please see Chain of Fools: Silent Comedy and Its Legacies from Nickelodeons to Youtube, just released by Bear Manor Media, also available from amazon.com etc etc etc