Howard Dietz (of Dietz and Schwartz) 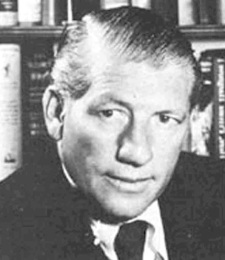 Today is the birthday of Howard Dietz (1896-1983). He is best known today as one half of the great tin pan alley songwriting team Dietz and Schwartz but at the same time he was an advertising and publicity man in the show business world and worked at that trade even as he was writing songs.

Dietz studied journalism at Columbia University and went to work at Goldwyn Pictures in 1919 as their head of publicity and advertising. After Goldwyn merged into MGM, Dietz continued on in that role, where he is often credited with having devised the MGM lion. In 1922 he began contributing sketches, lyrics, books and librettos to Broadway shows. For his last several shows, starting in the 1950s, he also wrote the music for his songs. His most famous show, in collaboration with Arthur Schwartz and George S. Kaufman is the original The Band Wagon (1931-1932) which introduced the Dietz and Schwartz song “Dancing in the Dark”.

To learn more about the history of show business, consult No Applause, Just Throw Money: The Book That Made Vaudeville Famous, available at Amazon, Barnes and Noble, and wherever nutty books are sold.