Madame Olympia DesVall and Her Horses, Dogs, and Birds

Born in Germany in 1876, Olympia DesVall (Olympia Blumenfeld) was an equestrienne who performed not only with horses but also a troupe of trained dogs, and later birds. She was a third generation circus performer.

In written accounts, Olympia’s animals were said to “adorably follow her all around the ring”. She played throughout France and Germany before making her first trip to the U.S. in 1907 to play the Hippodrome. In 1914, she returned to play the Barnum & Bailey Circus. 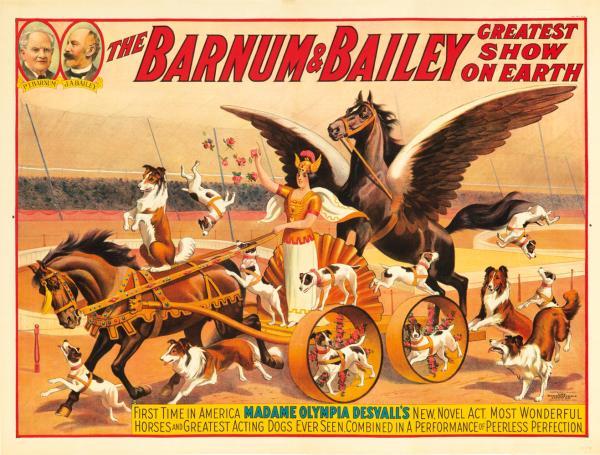 The following year (and for years thereafter) she toured the Keith circuit with versions of the same act including an appearance at the Palace. Joe Laurie, Jr. said that she had “the best bird act in the business”. Olympia’s sons were also in the act as children. Her two oldest sons later formed a musical comedy and animal act called the Novelle Brothers, and her youngest son became famous as a clown under the name Nolly Tate.

Olympia was still doing her act in 1920 — an item in a trade paper reports that she was suing a steamship company for the loss of many of the props and costumes pictures above (hopefully none of the dogs).

Olympia DesVall passed away in 1963.

Thanks to Brian Laurie-Beaumont, Olympia’s great grandson, who supplied some of the information that went into this post.