Tommy Martelle: The Boy in the Pretty Gowns 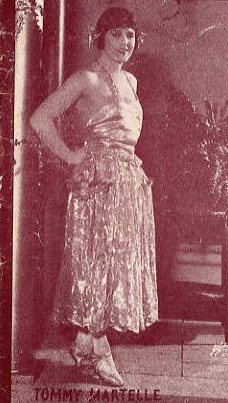 This gender bending performer is one we are presenting in a series to celebrate NYC Pride Week.

There is a dismaying dearth of biographical information readily available on female impersonator Tom (or Tommy) Martelle that I have been unable to uncover. This despite a huge amount of ephemeral evidence of his success on the stage in the nineteen teens and twenties: reviews in newspapers, advertisements, posters, and sheet music featuring his name and image. Billed from the outset as the “The Boy in the Pretty Gowns”, his career began circa 1911 and he appeared both on the vaudeville stage and in musicals. (It has been claimed that he appeared in Eltinge’s The Fascinating Widow but IBDB doesnt back this up). But he toured the country with his own musical shows with names like The Gay Young Bride, The Fashion Girl, Some Girls and Glorious Anabelle. Then, just as mysteriously as he arrives, at the end of the 1920s, he vanishes. Any new information would be welcome!