Nellie Wallace, “The Essence of Eccentricity” 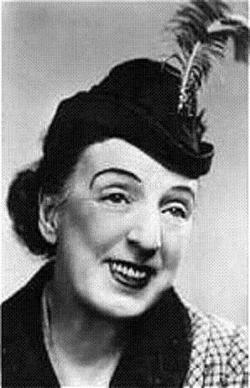 A second generation performer, she was born in Glasgow, and began singing and dancing with her two sisters onstage in childhood. At age 12, she branched out on her own, starting out as a clog dancer.   Nellie rapidly learned to get laughs by playing on what might charitably called her “untraditional beauty”. Alec Guinness described her as “…witch-like, with her parrot-beak nose and shiny black hair screwed tightly into a little hard bun… Her voice was hoarse and scratchy, her walk swift and aggressive; she appeared to be always bent forward from the waist, as if looking for someone to punch.”

She developed a character who was sort of love-starved and strange; as she became older, it naturally evolved into what we call a spinster or old maid. Her music hall act consisted of comedy character patter and naughty specialty songs such as “Under the Bed” and “Let’s Have a Tiddley at the Milk Bar”. Her London debut was in 1902; by the end of the decade, she was top of the bill. Nellie’s unusual appearance also enabled her to become one the very few, if not only, women to play the role of Pantomime Dame (it’s usually a drag role). This much beloved British performer also did several films over the years, and, naturally, radio. 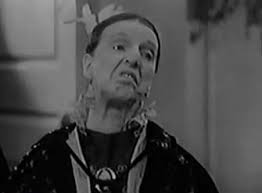 To find out more about music hall and vaudeville past and present, consult No Applause, Just Throw Money: The Book That Made Vaudeville Famous, available at Amazon, Barnes and Noble, and wherever nutty books are sold. And don’t miss my new book Chain of Fools: Silent Comedy and Its Legacies from Nickelodeons to Youtube, just released by Bear Manor Media, also available from amazon.com etc etc etc