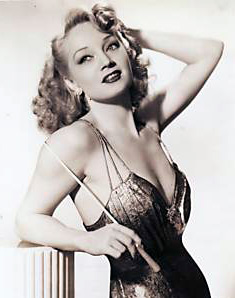 Today is the birthday of Ina Ray Hutton (1916-1984). Born Odessa Cowan, she was actually African-American but “passed” as white throughout much of her professional career. She and her sister June Hutton were the daughters of Marvel Ray Hutton, a local piano player and singer. In the 20s Ina Ray appeared in Gus Edwards revues as a singer and dancer at the Palace, and then was cast in both the Ziegfeld Follies and a George White revue. In the mid-30s a vaudeville agent persuaded to lead the all-girl band The Melodears. (Her sister June got her start singing with this band and later became a popular big band singer on her own). To say that Ina Ray lead the band is to sell her short — she was the singer, danced, and provided eye candy as well. She billed herself as “The Blond Bombshell of Swing”. She and her Melodears were featured in The Big Broadcast of 1936 and in several Paramount shorts, including Feminine Rhythm (1935), Accent on Girls (1936), and Swing, Hutton, Swing (1937).

The Melodears were a popular swing act until 1939, when Ina Ray disbanded it to lead an all-male band from 1940-1946. In the 50s she returned to the all-girl format for a local tv show called The Ina Ray Hutton Show. She retired in 1968, although she later appeared in the 1975 film Brother, Can You Spare a Dime?

To find out more about the variety arts past and present, consult No Applause, Just Throw Money: The Book That Made Vaudeville Famous, available at Amazon, Barnes and Noble, and wherever nutty books are sold. And don’t miss my new book Chain of Fools: Silent Comedy and Its Legacies from Nickelodeons to Youtube, just released by Bear Manor Media, also available from amazon.com etc etc etc