A tribute today to the immortal Smothers Brothers. I often think of the act Tom Smothers (born 1937) performed with his brother Dick (born 1939) as the last American comedy team with a wide national exposure, although I’ll concede it’s debatable. Other possible contenders include Allen and Rossi, Burns and Shreiber, and Rowan and Martin.  Nichols and May, and Stiller and Meara were sketch comedy duos, a slightly different idea, although one also with an old vaudeville pedigree. But after the Smothers Brothers and those others I mentioned I’m hard pressed to think of a team with the old vaudeville/burlesque combination of a straight-man and comic. The stand-up clubs that replaced the old school coffee houses, cabarets and nightclubs seem to be conducive to only a single person at the mic. Kinda weird.

At any rate, the Smothers Brothers were a combination folk-singing and comedy act, usually interrupting their squeaky-clean somewhat corny renditions of traditional songs to break out into nonsense, driven by Tommy — ironically the older of the two, who spoke and acted like a four year old child. And Dickie would scold him, and so forth. 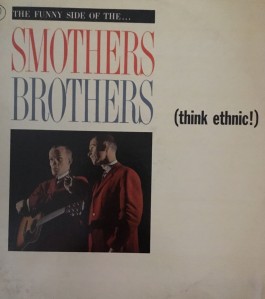 From playing coffee houses and clubs in the late 50s and early 60s, they began to cut comedy records and get spots on tv variety shows. (We had their records in my house when I was growing up and I played them to death!)

In 1965 they got their own sit-com, in which Tommy played an angel who is always causing trouble for Dick. The show veered away from what was popular about their act; it lasted only one season. But in 1967, they launched their legendary variety show, The Smothers Brothers Comedy Hour, which was known to be ground-breaking in terms of the raciness of its topical humor, and the fact that they presented cutting edge rock and roll acts like the Who and Janis Joplin as guests. 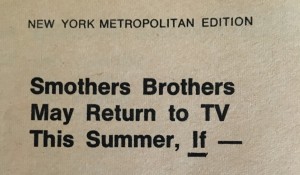 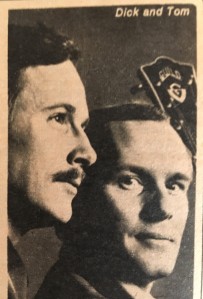 After they were cancelled, they were frequent presences on television over the next decade…I certainly first saw them in many other contexts before I ever saw clips of their original shows. Also in 1975, they tried to -re-launch their variety show, but it didn’t take off. In the 80s, you would see them more sporadically on television, and it was generally pretty painful. (Really the issue was Tommy…it gets hard to watch a middle-age man act like a small boy. I once saw a 58-ish Jerry Lewis play a three year old with a lollipop and, oh, how I wish I could erase that from my memory).

But they both still pop out of retirement occasionally. (The best surprise was seeing Dick as the judge in Martin Scorsese’s Casino!)

Now, one of their classic bits from the early years. The song “Boil That Cabbage Down” was one my dad used to sing to me: