Of Sammy Davis, Jr. (and the Will Mastin Trio) 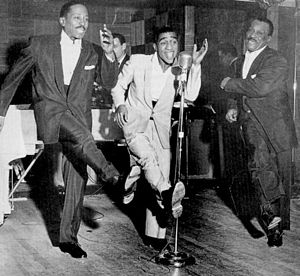 I think we can all agree that Sammy Davis Jr. was one dynamite cat. You don’t get to be A-1 unless you got the moves and the pipes, baby – and Sammy swung from the moment he arrived on this crazy, spinning planet. (Alright, I’ll stop.)

He was born in Harlem at the height of its Renaissance in 1925. His father (Sammy Davis, Sr—duh!) danced in a troupe headed by a gentleman named Will Mastin. His mother split early…threw ‘em over for another vaudeville troupe.

When Sammy was 5,  Mastin and Sammy, Sr. put him into the act. This didn’t come out of the blue. Sammy, Jr. was a prodigy – he’d demonstrated his talent as a singer and dancer since he was a toddler. Mastin then added two other adults and called the act “4 and ½”. To avoid the unwanted attentions of the Gerry Society the child was sometimes billed as “Silent Sam, the Dancing Midget”. In Michigan a concerned woman complained to theatre management about the fact that a child was performing. Because of the woman’s intervention the Mastin act was canceled, and Sam and his dad slept on park benches, starving and freezing in the Michigan winter, for several days. Thank GOD that woman had the child’s welfare in mind! 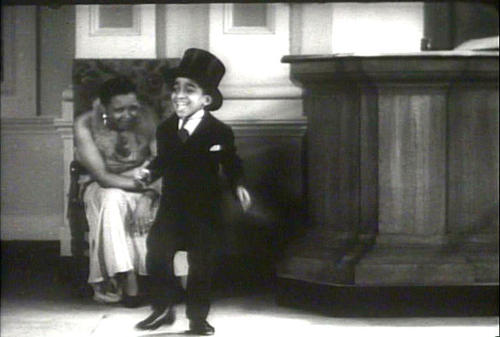 By the age of about seven, Sammy was slipping into the role of meal-ticket for the act, which was now named “Will Mastin’s Gang, Featuring Little Sammy.” By now, he was getting film roles, dancing in an Ethel Waters short called Rufus Jones for President, and playing a small part in a film with Lita Grey and Charles Chaplin, Jr.  Gradually, Mastin cut out the chaff until it was just himself and the Sammy Davises: the Will Mastin Trio. The three wore the traditional spats, vests, derbies, carnations. The team worked steadily throughout the years, making a living. But stardom seemed destined never to come.

In 1940 in Detroit, there was a fateful meeting. The Will Mastin Trio was on the same bill with the Tommy Dorsey band. Dorsey’s singer was Frank Sinatra. This little acquaintance would pay off big, but not immediately. First Sammy did a little time in the Army, where the U.S. G.I.s proved their superiority to the Nazi enemy by calling Davis the N word, beating him up, and tricking him into drinking urine.

When Sammy returned to the States, the Will Mastin Trio was back in business and the gigs started to get better. In 1946 , Frank gave them their first big break, a date at New York’s Capitol Theatre. Sinatra began to groom him, give him advice. It was Sinatra who advised him to sing and do impressions in addition to the dancing that was already stopping the show.

In 1954, Sammy lost his eye in a car crash, but even this did not stop him. Eddie Cantor was to become his second major guardian angel. It was Cantor who was behind Sammy’s well publicized conversion to Judaism (which sustained him through many trials); and it was Cantor who booked him several times on his tv program in 1955, ignoring hate mail and racist threats from lunatics with too much free time on their hands.

In 1956, Sammy starred in his first Broadway show Mr. Wonderful, which was one of the hits of the season. In 1959 he played Sporting Life in the film Porgy and Bess. 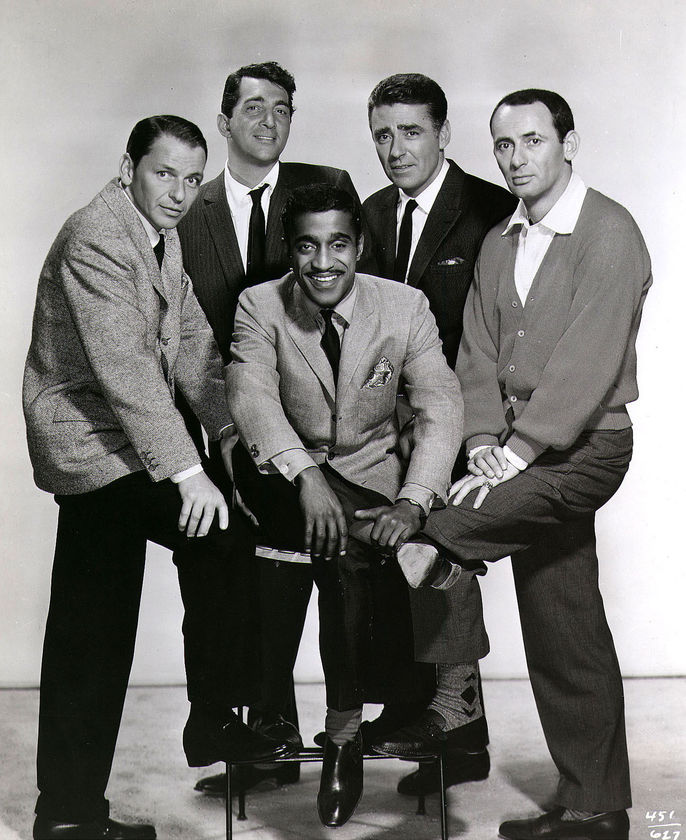 In 1960, the so-called “Rat Pack” was established with the film Oceans 11, a film project that allowed Davis, Sinatra, Peter Lawford, Dean Martin and Joey Bishop to film at Las Vegas casinos during the day, while performing onstage at night. Several similar projects followed through the mid-1960s. 1966 was his busiest year, appearing on Broadway in the lead of musical version of Clifford Odets Golden Boy, launching his own TV program The Sammy Davis Jr. Show and starring in his lead film role in A Man Called Adam.

Sammy was the only individual who managed to straddle the world of the old school show biz and that of the counterculture. This strange feat was possible because he was so young when he participated in the former, and so old when he attempted to do the latter.

The new Sammy arrived in 1968, with the film Salt and Pepper, which he and Peter Lawford shot in Swinging London, with the drugs, the chicks and the mod fashions. He and Lawford, both in their forties and greying, started to wear bell bottoms, beads, Nehru jackets, and sideburns. A 1970 sequel to Salt and Pepper called One More Time was directed by Jerry Lewis. In 1972, he appeared, peace sign and all, on the hit TV series All in the Family. The following year he actually hit the pop charts twice, with the songs “Mr. Bojangles” and “The Candy Man.” 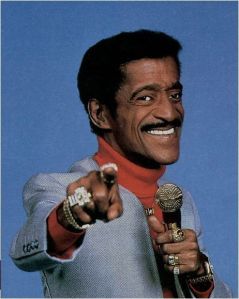 I venture to say most people of my age got their first taste of tap dancing through Sammy’s television appearances during these years. Needless to say, tap was rated pretty square circa 1975. Unfortunately Sammy’s talent was matched by a show bizzy insincerity so pronounced that it became legendary. He laughed too hard at everyone else’s jokes, seemed to be having way too good a time, appeared to be everyone else’s best friend, and everyone was a genius. Of course, this might have been the drugs. 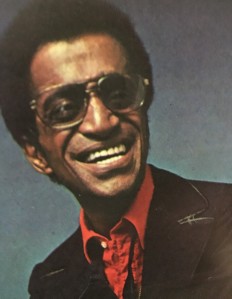 At any rate, such qualities marred his syndicated talk show Sammy and Company (1975-77) with sidekick William B. Williams, and assured his ostracization in the post-Saturday Night Live era . His most visible projects in later years were the movies Cannonball Run 1 (1982) and Cannonball Run  2 (1984), which were done with other former members of the Rat Pack. Davis died of throat cancer in 1990.

To find out more about history of vaudeville, including veterans like Sammy Davis Jr and the Will Mastin Trio, consult No Applause, Just Throw Money: The Book That Made Vaudeville Famous, available at Amazon, Barnes and Noble, and wherever nutty books are sold.