Victor Borge: The Cut-Up from Copenhagen 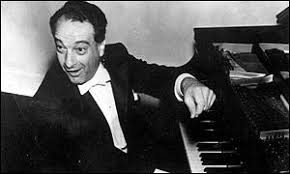 Proof palpable that all Danes are not melancholy was comedy-musician Victor Borge (Børge Rosenbaum, 1909-2000). Borge came to America too late for vaudeville but not too late for radio and TV variety, which is where many of us enjoyed him during the second half of the 20th century. But his loveable personality and absurd sense of humor would have fit right in on the vaudeville stage. His schtick was to come on in evening clothes, sit at a grand piano, and then proceed to get distracted by all sorts of fol de rol — accidentally play the music upside down, veer from a well-known classic to a popular standard, kibitz with the audience, and so forth. A surprising number of his routines were verbal and whimsically literary, given that English was not his first language. But, as he had established from childhood, he was a genius.

Borge was a second generation musician. His father played viola with the Royal Danish Orchestra. His mother played piano, and taught him the instrument from the age of two. At eight he gave his first formal recital; at nine, he began to study at the Royal Danish Academy of Music. For several years he gave concerts as a serious classical musician, but in 1933 he began starring in his own comedy revue performances, with which he was soon touring international. By 1937 he was also appearing in Danish films. Borge was giving a show in Sweden in 1940 when the Nazis invaded Denmark. He fled to the U.S. with his wife (an American national) by way of Finland. Borge was Jewish, we should note, and a vocal critic of Hitler and his policies.

American audiences embraced Borge almost immediately. In 1941 he began appearing on nationally popular radio shows like Rudy Vallee’s and Kraft Music Hall with Bing Crosby. In 1944 he appeared in the musical comedy film Higher and Higher with Michèle Morgan, Jack Haley, Frank Sinatra, Leon Errol, Mary Wickes, Barbara Hale, Mel Torme, Dooley Wilson, and Paul and Grace Hartman. From 1946 through 1951 he starred on his own popular radio program The Victor Borge Show. He then appeared in a one-man Broadway show Comedy in Music, which proved to be the longest running solo show in history, running 849 performances, from 1953 through 1956. He continued to tour with it for decades thereafter, and to present it as series of TV specials. In 1952, being a Dane and all, he hosted the first TV broadcast of the Danny Kaye film Hans Christian Anderson.

Meanwhile, starting in 1949 Borge had also starting appearing in television variety, which is where most Americans of a certain age know him from. You could see him on The Ed Sullivan Show, Paul Whiteman’s Goodyear Revue, The Saturday Night Revue with Jack Carter, All Star Revue, The Kate Smith Evening Hour, The Fred Waring Show, The Arthur Murray Dance Party, The Ken Murray Show, The Colgate Comedy Hour, Kraft Music Hall with Perry Como, The Tonight Show with both Jack Paar and Johnny Carson, The Smothers Brother Comedy Hour, The Hollywood Palace, The Jackie Gleason Show, The Joey Bishop Show,  The Dean Martin Show, This is Tom Jones, The Muppet Show (as well Sesame Street and The Electric Company), Dinah!, David Frost, Mike Douglas, and Merv, and even game shows like The Match Game, Hollywood Squares, etc, That’s a sweep, isn’t it? That’s like, ALL the shows.

In addition, he released dozens of record albums, starting in 1945. This was a man who liked to entertain. In 1982, he appeared as himself in Martin Scorsese’s King of Comedy (which is funny, because he had stopped appearing on late night TV talk shows by then). Although he had by no means retired. In the ’80s and ’90s I associate him with the occasional special on PBS. In 1999, at the age of 90 he received a Kennedy Center honor from President Bill Clinton. At the time of his death a few months later, he had been a professional entertainer for 75 years.

To learn more about the variety arts, including radio and tv variety, please see No Applause, Just Throw Money: The Book That Made Vaudeville Famous