On the Joys and the Loves of “Lovejoy” 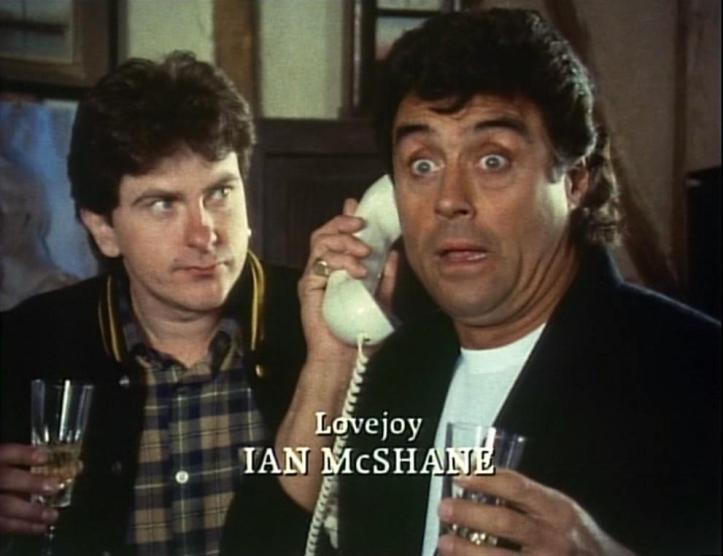 It was inevitable that I would do a post on Deadwood, which I rate the greatest TV western series ever made (at least in terms of production values; arguments can be made about the writing). Among its thousandfold virtues is that it represents an overdue pinnacle for RADA-trained English actor Ian McShane (b. 1942), who had been hiding in plain sight for four decades. Prior to Deadwood, McShane had been in If It’s Tuesday This Must Be Belgium (1969), The Battle of Britain(1969), The Last of Sheila (1973), Roots (1977), Jesus of Nazareth (1977), Disraeli (1978), The Fifth Musketeer (1979), Grace Kelly (1983) etc, with guest shots on Space: 1999, Magnum PI, Miami Vice etc etc. I saw him in a lot of that stuff — looked right at him — and it never moved the needle. He never made an impression that I can recall. And he was the STAR of some of those shows. But there was no missing the guy in Deadwood: he not only chewed the scenery, he spat it back out, so forcefully the splinters were like bullets.

But, not being British, my picture was incomplete. On British television he had played Heathcliff in Wuthering Heights (1967) and the dude in the bed in Whose Life Is It Anyway? (1972). But most importantly, he had starred in a preposterous long-running TV series called Lovejoy, with one season in 1986 and five more 1991-1994. 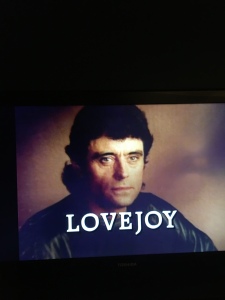 At bedtime, my wife and I often like to send ourselves to sleep with what we call “Soporific English Mysteries” — shows about middle aged British detectives walking around quaint villages (and occasionally cities) talking to several people until they figure out which one is a murderer. The shows include Inspector Morse, Vera, Foyle’s War, Midsomer Murders, Father Brown, etc etc etc. By American standards, it’s all very calming and cuddly. There are no guns, and what passes for foot or car chases or fisticuffs are usually hilarious. Usually they just solve puzzles and try to read people’s poker faces. And these shows speed our departures for the land of Wynken, Blynken, and Nod.

At any rate, that is how we stumbled upon Lovejoy. Lovejoy is particularly hilarious because it hasn’t even got any murders. McShane plays the title character, a mildly larcenous ANTIQUES DEALER. Despite his outward appearances (and his unavoidable resemblance to Al Swearingen) he’s not a rogue really (though he’s often described as one) — he’s more of a loveable scamp. Kind of like a stray mutt. In a mullet. People wag their finger at him, like, “Oh, Lovejoy you’re a caution!” and “I say, is this check going to bounce on me again, Lovejoy?” Like Olivier’s Richard III Lovejoy uses direct address to share his thoughts and plans with the audience, things like “That doddering old puddinghead is going to let those Victorian dining room chairs go for 200 pounds. An infant could see they’re worth 400 easy!”

If that’s all it was, it wouldn’t be much of a show. Lovejoy does solve mysteries — but it’s usually about recovering stolen property, and solving forgeries and other swindles! “The ring was right here in its box last night, Lovejoy! I can’t understand what could have happened to it. It was only me, the maid, Aunt Emily, and my eight year old nephew here last night!” To help him solve these cases, his confederates include his platonic (married) girlfriend Lady Jane (played by Phyllis Logan, now better known as Mrs. Hughes from Downton Abbey), and a couple of comical dolts: Eric, a mentally slow kid who is Lovejoy’s unpaid apprentice (Chris Jury) and Tinker (Dudley Sutton), an elderly dandy with a variety of useful skills, although he seems somewhat senile. And they go to auctions and things, and house sales, and shops, and somehow there is always INTRIGUE of a very minor sort. And because these guys are our heroes, they have biggish hearts, and generally are well placed to right wrongs committed by their competitors and rivals who are much more unprincipled than they are. And this being British TV, there are often exciting guest stars (in the episode we watched last night it was Joanna Lumley). The show is based on a series of novels by John Grant, adapted for TV by Ian La Frenais.

But consider this both a confession and warning: we watch this show primarily to roar about how hilariously lame it is. The premises are lame, the plots are lame, the performances are lame, and McShane is completely off his leash. They let him do any amount of mugging and fooling around that he wants and it all winds up on the show. We’re into the third season and it’s already beginning to feel like Hudson Hawk or Don’t Raise the Bridge, Lower the River. And if you don’t know what those are, just leave your message on the table and ring the bell. Someone will get back to you in due course.