Beryl Wallace: From the Chorus Line to the Crash Site 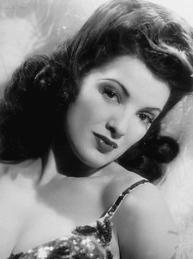 Sometimes your good luck is also a Trojan horse for your bad luck. Brooklyn born Beryl Wallace (Beatrice Heischuber, 1912-1948) was plucked from the chorus by impresario Earl Carroll to be his paramour, the Lillian Loraine to his Ziegfeld, as it were. The situation came with many perks, but it also meant that she was with Carroll when he came to rather a violent and sudden end.

Wallace was in a couple of dozen Hollywood movies, mostly in bit parts, with larger roles in a few B pictures like, Rough Riding Rhythm (1937, with Kermit Maynard, the look alike brother of Ken), Romance of the Rockies (1937 with Tom Keene and Franklyn Farnum), and Air Devils (1938). She had a walk-on in WC Fields You Can’t Cheat an Honest Man (1939). In some of her later films she is a featured singer in a night club or saloon scene. Her last picture was Enemy of Women (1944).

Wallace’s chief Hollywood fame was local. Starting in 1938 she headlined at his supper club; he immortalized her image in neon, 20 feet tall above the entrance.

During World War II Wallace entertained troops at the Hollywood Canteen and the Masquers Club and hosted a radio show called Furlough Fun.

It all came to an end in 1948, when Wallace and Carroll were among the victims of a plane crash, while en route to New York from L.A. Wallace was only 31 at the time.

To learn more about the variety arts, including Broadway revues like Earl Carroll’s please see my book No Applause, Just Throw Money: The Book That Made Vaudeville Famous, and for more on early film, please read Chain of Fools: Silent Comedy and Its Legacies from Nickelodeons to Youtube.