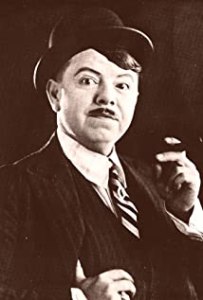 Cooke was a moneyed Los Angeles local who’d been educated in Switzerland and had been a rancher and society nob before taking it into his head to be in pictures. He was nearly 40 when he began appearing in Mack Sennett comedies as an ensemble player in 1919, often playing drunks and party gatecrashers and the like, in comedies with Ford Sterling, Billy Bevan, Charlie Murray and the rest of the bunch. More than once his character is identified as “Social Pest”. He has a decent part in A Small Town Idol with Ben Turpin, though he’s just an extra in Mabel Normand’s Molly O, both in 1921. The following year he was in The Three Must-Get-Theirs with Max Linder.

Starting in 1923 he teamed up with comedian Kit Guard in a number of different film series. That year the appeared in over two dozen Fighting Blood comedies, supporting fellow Sennett alum George O’Hara. These were boxing comedies directed by Henry Lehrman and Mal St. Clair. Cook played a promoted named Nate Shapiro. He then did a drunk turn in Johnny Hines‘ feature Conductor 1492 (1924). He and Guard next supported Alberta Vaughn in The Telephone Girl and other series at FBO, sometimes getting to headline themselves. They are in scores of these FBO shorts from 1924 through 1930.

The FBO comedies were good steady work week after week for seven years, but in the talkie era pickings got slimmer. Cooke had supporting parts in two features in 1931: Defenders of the Law (again with Guard, as well as comedy vet Mae Busch, although the star was Broadway’s Catherine Dale Owen), and The Mystery Train with Hedda Hopper, Marceline Day, and Bryant Washburn. This was followed by a turn in the 1931 Hal Roach comedy Catch as Catch Can (1931) with Zasu Pitts and Thelma Todd. In 1932 he had bit parts in Wheeler and Woolsey’s Girl Crazy and Hold ‘Em Jail. His last screen appearance was in the Walter Catlett short Dream Stuff for Sennett. He died two years later of cancer.

For more on classic and silent slapstick comedy please read Chain of Fools: Silent Comedy and Its Legacies from Nickelodeons to Youtube.