The Hilarity and Horror of Phil Hartman 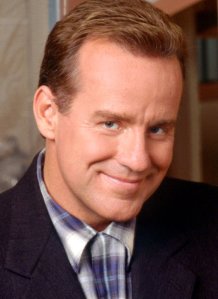 Seems strange and unjust to live in a world in which Phil Hartman (1948-1998) is the answer to a trivia question about pop culture two decades ago, when all of his contemporaries continue to be going strong. Hartman would be in his early 70s at this writing. Waking up to the news of his murder one day was some shit we did not need in the ’90s, after Waco, O.J., the first World Trade Center Bombing, the Rodney King verdict and riots, the Unabomber, the Northridge Earthquake, the Yugoslav Wars (Serbia, Bosnia, Kosovo etc etc etc), and the Monica Lewinsky scandal. Now it all seems almost quaint, but, nah, it was pretty horrible in its own right.

Interestingly, Hartman was of the same generation as SNL‘s original Not Read for Prime Time Players, but didn’t get on the show ’til over a decade later than them. He didn’t go into comedy until he was in his late ’20s. Prior to that, he had been a graphic artist with his own business. His clients were mostly rock bands — he did work for America; Crosby, Stills and Nash; and Poco, among other long-haired clients. When one hears he was originally from Canada, you might be forgiven for thinking that he came up through Second City Toronto, but he was living in L.A. by the time of his adulthood — the Groundlings is where he got his start. 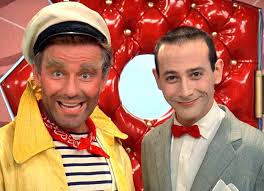 While studying and performing with The Groundlings, Hartman met Paul Rubens, his first important collaborator. He co-wrote Pee-Wee Herman material, and appeared in Pee-Wee productions as Kap’n Karl. He was involved with The Pee-Wee Herman Show (1981), which was the film of the live stage show; the movie Pee-Wee’s Big Adventure (1985), and the Saturday morning kids’ show Pee-Wee’s Playhouse (1986).

At around the same time (late ’70s and early ’80s) he had begun to get voiceover work on animated cartoon shows like Scooby Doo, The Smurfs, Dennis the Menace, etc. This facility with voices was something he had developed with The Groundlings, and he was increasingly hired to supply the voices of announcers, game show hosts, and pitchmen characters, which became his niche.

In 1986 Hartman was cast on Saturday Night Live, then starting its 12th season. He was hired at the same time as  Dana Carvey,  Jan Hooks, Victoria Jackson and Kevin Nealon, who joined holdovers John Lovitz, Nora Dunn, Dennis Miller and A. Whitney Brown. Hartman rapidly became one of the show’s stars, especially excelling at playing characters in parodies of classic Hollywood films, and tv shows and commercials from 1950s television. He was often called on to do impressions of famous people in sketches, but I always felt his own personality was too strong; most of his impressions weren’t too good. Oddly, I felt he did Presidents best (Reagan and Clinton) as opposed to actors or other pop culture personalities. 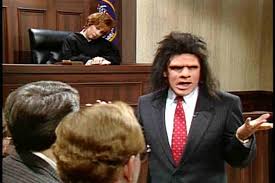 My favorite thing of his was “Unfrozen Caveman Lawyer”. The first time I saw that sketch was one of the hardest times I ever laughed, both because of its concept, but because the character was a distillation of what Hartman did best, a smarmy, evil ambulance chaser. There were like ten levels to why it was funny, but among them (for me) was the idea that the Phil Hartman “thing” was so strong and so pervasive, it would even emerge from the mouth of a very realistic looking Neanderthal.

In 1991 he began to be booked regularly on The Simpsons. He played a variety of characters on the show, most frequently a hack actor named Troy McClure, who was often seen in cheesy Hollywood fare on the Simpsons television set.

Through the SNL years and beyond he frequently got supporting roles in movies, including, but not limited to: Jumpin’ Jack Flash (1986) with Whoopi Goldberg; Three Amigos! (1986) with Steve Martin, Chevy Chase, and Martin Short; Blake Edwards’ Blind Date (1987), Disney’s The Brave Little Toaster (1987); Fletch Lives (1989) with Chase; Bill Murray’s Quick Change (1990); National Lampoon’s Loaded Weapon 1 (1993); CB4 (1993) with Chris Rock; Coneheads (1993) with Dan Aykroyd, Jane Curtin, and Larraine Newman; So I Married an Axe Murderer (1993) with Mike Myers; Sgt, Bilko (1996) with Martin; and the holiday comedy Jingle All the Way (1996) with Arnold Schwarzenegger and Sinbad. Though he hoped to star in films of his own, he faced a similar problem to Dan Aykroyd. He was prized for his character work, and not seen as a lead type who could carry a film.

Hartman remained with SNL for nearly a decade, leaving after season 19, when the cast had swollen up to encompass himself and Nealon, Chris Farley, Adam Sandler, Mike Myers, David Spade, Rob Schneider, Michael McKean, Julia Sweeney, Tim Meadows, Ellen Cleghorn, and Melanie Hutsell, with occasional appearances by Al Franken, Norm MacDonald, Jay Mohr, and Sarah Silverman. It was a very different show by that point, louder, more aggressive and more slapsticky, and Hartman opted to move on.

His new (and final) major gig was as a supercilious radio personality on the sitcom Newsradio, starting in 1995, which put him in a great ensemble featuring Dave Foley of Kids in the Hall, Stephen Root, Joe Rogan, and Maura Tierney and Khandi Alexander (both of whom I first knew from ER). 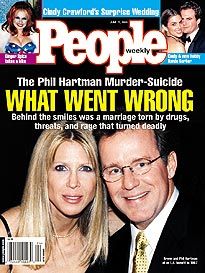 Then the bad news. In 1998, he was shot in the head while he slept by his drug-crazed third wife Brynn Omdahl. There seems to have been no precipitating cause, other than Omdahl’s own frustrations about being the wife of a star who was away from home all the time, and not a star herself, and the fact that she was on coke, Zoloft and booze. The pair had apparently argued, and then she shot him in bed at around 3 in the morning. Later, after police had arrived, she turned a gun on herself and completed the murder-suicide. The pair had two children, who were in the house at the time.

So, this was a disturbing episode to contemplate. So sudden and so senseless. I mean, Phil Hartman could be MIGHTY smarmy, and I bet that could be infuriating in real life, but just because you FEEL like shooting a guy’s face off doesn’t mean you need to actually do it! Anyway, we were instantly robbed of someone who had brought us a great deal of happiness. At the time of his death, Newsradio was about to enter its fourth season. Hartman was succeeded (not replaced) on the show by Jon Lovitz. In 2015 a bio-pic about Hartman’s life called Nice Guy Phil was announced, but to date it appears not to have made it out of pre-production.

To learn more about variety entertainment, including variety tv like Saturday Night Live, please see No Applause, Just Throw Money: The Book That Made Vaudeville Famous, and for more on classic comedy please read Chain of Fools: Silent Comedy and Its Legacies from Nickelodeons to Youtube.