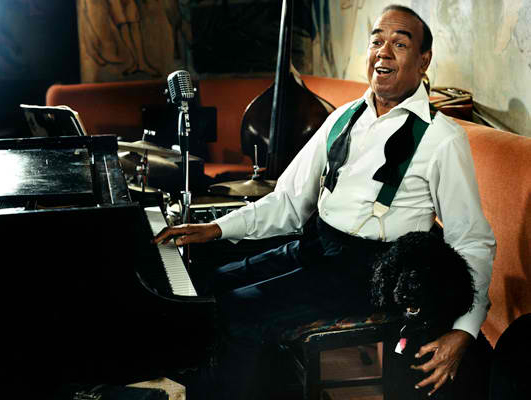 Having profiled over 1500 vaudeville veterans on this blog over the last dozen years or so, some may find it curious that I have dragged my heels on any attention for Bobby Short (1924-2005). After all, Short was a prominent talking head in that 1997 American Masters documentary about vaudeville. Frankly, that’s one of the reasons I’ve demurred. I’ve always disliked that jerryrigged, somewhat skewed film, and the inclusion of Short is among the myriad reasons for my antipathy, for his inclusion in the film was a subtle misrepresentation. Short was not on the vaudeville circuits per se, he came along a bit late for that, even in his childhood. He played presentation houses, night clubs, the Apollo, and the like starting in the mid to late ’30s — when the actual vaudeville circuits were, truth to tell, defunct. But there were few “gets” to be gotten even in 1997 and Short was one the filmmakers managed to get. His show business memories are not irrelevant or without value; it’s just that they are, technically, not about vaudeville.

The second reason I’ve not rushed to include Short in these annals is that the Cafe Carlisle style cabaret aesthetic is not my thing per se. Many people have assumed otherwise over the years, making for conversational awkwardness, but it is far from my bag. I love ragtime, classic blues, rock and roll, and even tin pan alley, but to just listen to some guy in nice clothes crooning “standards” bores me to tears. I need…SOMETHING. Can the singer be in drag, at least? Can they have a repertoire of their own hilarious original songs? Can they be aggressive? And if I can’t have those, as a consolation prize I’ll at least take “sex” (heterosexual sex, I’m afraid, like Julie London, or somebody). It’s not that Short is gay, Elton John is gay, and he sets the piano on fire, writes his own tunes and (in his classic days) was wearing a feather boa, top hat and plastic goggles. THAT, by the way, is vaudeville. Some nice dude singing the songbook of all your old favorites…oh, my goodness, look at the time.

But we were watching Hannah and Her Sisters on TV the other day, and there was Short with his pleasant face and pleasant voice in a short cameo, and he’s been dead for 15 years, and it’s his birthday, so here we are. And I guess I’m getting old.

Short was from Danville, Illinois, about 2 and a half hours south of Chicago. A piano prodigy, he was already playing professionally at local roadhouses and private parties when he was 8 or 9 years old. By ten he was performing in hotel bars and ballrooms in Chicago. From the ages of 11 to 13, he got his first burst of fame, performing as “The Miniature King of Swing” with such stars as Louis Armstrong, Ethel Waters, the Andrews Sisters, and Fats Waller. He performed on the radio and at venues like the Apollo Theatre and major presentation houses. Then, exhausted and stressed from life on the road, he returned to Danville and continued to play at local venues while he attended high school. In the mid ’40s he worked with The Incomparable Hildegarde, a major influence. He had long running engagements at the Blue Angel in New York, on L.A.’s Sunset Strip, and in Paris. He began cutting albums in 1955. In 1962 he was in the short-lived Broadway show Night Life. In 1968 he began his long run at Cafe Carlisle, singing old standards in an act that was pretty much about nostalgia, which is naturally why someone like Woody Allen would be a fan. You could occasionally catch him in films and on TV, usually playing the piano on shows like The Love Boat and Frasier. A 2003 cameo on 7th Heaven was his last national appearance.

To learn more about the history of vaudeville, please see No Applause, Just Throw Money: The Book That Made Vaudeville Famous,