Walter B. Gibson: The Magician Behind “The Shadow”

Gibson is a hard man to nail down, for he often wrote under pseudonyms, such as Maxwell Grant, Theodore A. Tinsley, Andy Adams, Walter Scofield, etc. He wrote hundreds of books, both fiction and non-fiction, almost all with some connection to the weird, the uncanny and the bizarre.

A 1920 graduate of Colgate University, Gibson initially worked as a reporter and crossword puzzle writer for Philadelphia newspapers like The Evening Ledger and The North American. It was during the ’20s that he began writing books about stage magic, the occult, hypnotism, numerology, fortune-telling and the like, as well as books by, with, for, and about major magicians such as Houdini, Thurston, Blackstone, and Dunninger. Among other things, Gibson is credited with popularizing the linking rings trick in the U.S. 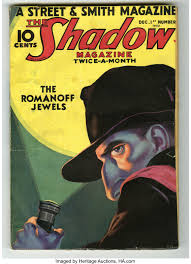 In 1928 Gibson began editing a magazine called True Strange Stories. His 1931 submissions to Detective Story magazine led to his being hired to flesh out the radio character The Shadow. Up ’til that time, the character had just been a mysterious voice that introduced the radio show Detective Story Hour. Gibson cooked up content for a new pulp mag spotlight the adventures of The Shadow, developing the character and his alter egos (initially Kent Allard, and later the “man about town” Lamont Cranston). This dark, nocturnal figure was to influence many a comic book superhero who came later, in particular The Batman. Initially envisioned as a cloaked man with a large broad brimmed hat to disguise his face, the concept was later tweaked to The Shadow hypnotizing evil-doers so that he appeared invisible, striking fear into their superstitious hearts. Actor Frank Readick spoke the chilling wraparound “WHO knows what evil lurks in the hearts of men?” When The Shadow got his own radio show (1937-1954), 22 year old Orson Welles was the first actor to play him. Meanwhile, Gibson turned out nearly 300 Shadow stories for the pulp magazine through the end of the 1940s. In addition to the radio show, from 1937 through 1958 several of his Shadow stories were used as the basis for B movies starring the likes of Rod La Rocque, Victor Jory, and Kane Richmond. And naturally the 1994 reboot with Alec Baldwin.

From 1941 through 1946, Gibson wrote comic books starring a fictionalized version of the magician Blackstone. From 1948 through 1950, he wrote the radio show Blackstone, the Magic Detective chronicling his continued adventures.

In 1949, Gibson married Pearl “Litzka” Gonser (1901-1996) widow of the magician The Great Raymond, and heir of his act. Together and separately, Walter and Litzka continued to turn out books on magic, the occult and related topics. Litza Gibson sometimes wrote under the name Leona Lehman.

Throughout the ’50s, Gibson continued to script comics for DC, Charlton, Avon, Marvel, Vital and others with titles like Space Thrillers, Space Adventures, Space Detective, Racket Squad, Rocket to the Moon, Robot Men of the Lost Planet, and Jim Solar, Space Sheriff. Atypically, he also wrote the novelization of the Preston Sturges/Harold Lloyd comedy The Sin of Harold Diddlebock.

In the early ’60s Gibson wrote five adolescent adventure novels in the Biff Brewster series (similar to the Hardy Boys and Nancy Drew).

After Bess Houdini stopped doing her famous annual seances to contact her dead husband in 1936, she passed the tradition on to Gibson, who carried it on (with colleagues like Milbourne Christopher) until he died in 1985. Gibson passed on the responsibility to Dorothy Dietrich of the Magic Towne House, who now performs them at the Houdini Museum in Scranton, Pennsylvania.

Walter B. Gibson cranked out over a million words a year. Wiki has a partial bibliography here.

To learn more about variety entertainment, please see No Applause, Just Throw Money: The Book That Made Vaudeville Famous,