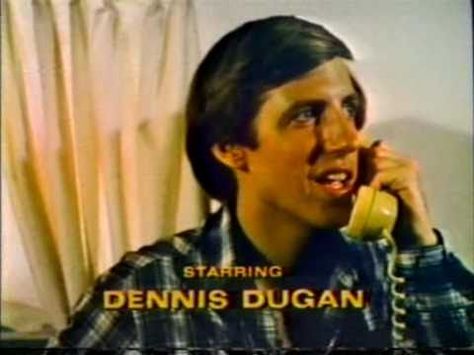 Let me quickly stipulate that I have plenty of professional respect for actor and director Dennis Dugan (b. 1946). I literally grew up watching his work. It’s just that, well, the characters he played were usually dopey, and the movies he directs totally are, too. It’s, like, his brand.

His name is not remotely a household word, but he’s definitely one of those recognizable character actors of the ’70s. His biggest credit was the lead in the very short-lived Richie Brockelman, Private Eye (1978). I loved this show, which was a spin-off of The Rockford Files. This was the age of of the high concept gimmick detective show. Cannon was the fat detective. Police Woman was the female detective. Ironside was the disabled detective. Barnaby Jones was the elderly detective. Richie Brockelman was the YOUNG detective. The character was supposed to be 22 years old; Dugan was 31 at the time. He had a very appealing presence, kind of a precursor to Owen Wilson, both good looking and goofy. He was also in high profile episodes of M*A*S*H and Columbo among other things. He was in Joan Rivers’ TV movie The Girl Most Likely To...(1973 starring Stockard Channing), and had supporting roles in films like Paddy Chayefsky’s The Hospital (1971), Night Moves (1975), Smile (1975), Day of the Locust (1975), Harry and Walter Go to New York (1976), Norman…Is That You? (1976) with Redd Foxx and Pearl Bailey, The Howling (1981), Can’t Buy Me Love (1987), and Parenthood (1989). He had a hilarious recurring role as Captain Freedom on Hill Street Blues in 1982, followed by two other short-lived series, Empire (1984) and Shadow Chasers (1985-86).

NOW, almost all of these movies are almost all in the category I like to call “really stupid post-SNL comedies”, and it is a fact that Dugan has been nominated for, and won, several Razzies for Worst Director. This may or may not be why it has been seven years since his last movie was in theatres. But on the other hand he is a director who specializes in low-brow comedy, something of a rarity for our time, and so you have to hand it to him. I’m glad he exists on that score. His most recent movie, Love, Weddings and Other Disasters is actually in the can; it’s just been pushed back because the pandemic. As it stars Diane Keaton and Jeremy Irons, I am anticiapting an attempt at something more mature this time out. We’ll be glad to watch it and see.