This day in 1972 marked the final closure of San Francisco’s Playland at the Beach, a great historic amusement park, and really the last of a great collection of attractions that had been in its vicinity for around a century, including also a succession of resorts named The Cliff House, as well as the fabled Sutro Baths. We hasten to point out that there are still attractions at this location to this day. In fact, I first learned about all this by visiting them, thanks to the hospitality of Confetta-Ann Rasmussen, pseudonymous authoress of the wonderful blog On This Day in Jazz Age Music. About a year ago she suprised me by coming to my talk at the San Francisco JCC and whisking me away to see the remains of the Sutro Baths, to enjoy a meal at Louis’ Restaurant, and to see the current iteration of the Cliff House, which is plenty fabulous. I was assisted in my research by Rena Azevedo-Kiehn of the Niles Essanay Silent Film Museum, who laid three wonderful DVDs on me, containing documentaries made by Tom Wyrch, entitled Remembering Playingland at the Beach (2010), Sutro’s: The Palace at Land’s End (2011), and The Cliff House and Sutro Baths (2013), Ernie Fosselius, maker of one of the funniest movies of all time, is among the talking heads!

Anyway this post is dedicated to all my west coast friends and family, who I have been thinking and worrying about during this last rash of wildfires. I’m afraid this won’t be a total excercise in escapism, however. Much like Coney Island, which this historic resort resembles in many ways, this seaside amusement destination has fallen victim to many catastophic fires. But also much like Coney Island, its storied past contains many spellbinding wonders that make the imagination soar.

The seaside spot in question is known as Point Lobos, located on the outskirts of San Francisco, five or six miles from the center of town. I’m sure you know that “lobos” is Spanish for wolves, but in this case it refers to sea wolves, which is what South Americans call what we know as sea lions. They are plentiful in this area, and until very recently they used to come and sun themselves on the beach and on the rocks just offshore. Understandably, people used to love to come and look at them, picnic, pick wild strawberries, etc.

The local legend is that the first Cliff House at Seal Rocks was built in 1858 by San Francisco Founding Father Samuel Brannan, the town’s first millionaire, who founded the California Star and publicized the Gold Rush. The legend said he built the place out of salvaged lumber from a shipwreck. If it happened, there is no record of it: nothing written down, no archaeological evidence, nor any painting or photograph of it. It’s simply a story people have liked to tell from that day to this. While there is no reason to believe it…there is also no reason to disbelieve it. 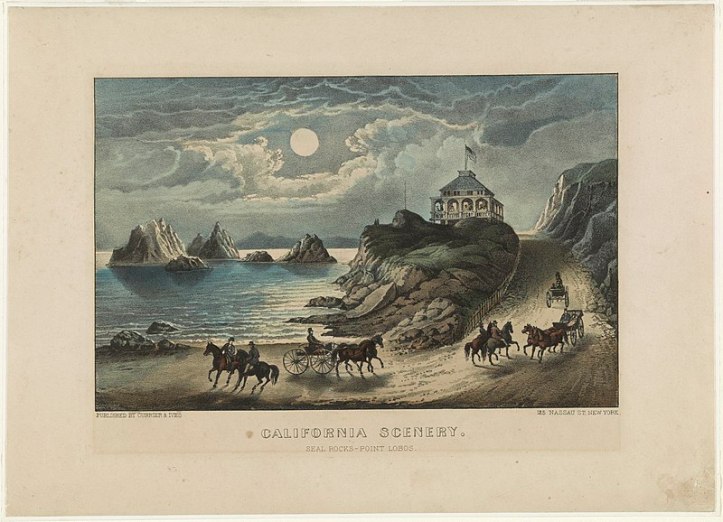 In 1863 the first documented Cliff House was built by local entrepreneurs, just before a toll road, street car lines and the like connected the remote spot to the center of town. One of the backers was a local politician — his insider knowledge must have played a role, something else that reminds us of Coney Island. This iteration of the Cliff House featured a saloon, and card playing rooms, and separate parlours for the ladies. It was by all accounts a bit wild, although there were also innocent pleasures to be had, such as balloon ascensions, and spectacles like tight rope walkers.

In the early 1880s, Nevada silver mining millionaire Adolph Sutro came to the area for the first time, and began making enormous real estate purchases throughout San Francisco, including this spot. The Cliff House was included among the purchases. Sutro began making improvements to the place, which was beginning to run down, and to make it more family friendly. Naturally, any San Franciscan of any note spent time there, as well as 3 U.S. Presidents.

Major changes to the rickety old place were inevtable though. In 1887 a schooner carrying explosives ran aground and blew up. The blast was so great that the Cliff House was damaged and its stables were demolished. Then in 1894, the Cliff House itself burned down. The nearest fire station was miles inland; there was no saving it.

Sutro took the opportunity to build a new fabulous Cliff House on the same spot. The new building was enormous, many times larger than the old place. Uniquely, despite all outward apearances, it was never actually a hotel, but rather strictly an elaborate restaurant with lots of private rooms for meetings, parties and the like, as well as shops of the sort you might find in a hotel lobby or mall. The building did have accomodations for sleeping, but only for the staff.

Then in 1896, Sutro enhanced this tourist destination immeasurably by building the famous Sutro Baths, the world’s largest indoor swimming pool facility — with attractions and amenities far beyond that.

The Sutro baths comprised six saltwater pools (fed directly from the ocean and heated to different temperatures), one freshwater pool. an ice skating rink, a 2700 seat amphitheatre, club rooms to accomodate 1100, and 517 private dressing rooms. The largest pool, kept cold, was in the shape of an L. And there were countless slides, diving boards, swinging rings, and the like. Aquatic events were held there, such as swimming and diving demonstrations and contests. But also non-aquatic competitions, such as boxing and archery.

And, perhaps most relevant to our interests, a DIME MUSEUM, the collections for which had been aquired by Sutro in 1894 from the estate of Woodward’s Gardens. Woodward’s Gardens, which merits its own article, was an enormous pleasure garden in the Mission District, operating between 1866 and 1891. The museum grew to occupy 3.5 acres on the Sutro site, its collections naturally being added to over the years. There were works of fine art, an Egyptian museum with actual mummies, a Last Supper tableau containing wax figures of Jesus and the 12 Apostles, an exhibit of General Tom Thumb artifacts (including his clothes and wedding coach which now reside at the Barnum Museum), a maritime museum, a panorama of the world, a collection of taxidermy (including a polar bear, a tiger and a cheetah), a torture museum, a gangster museum, a feejee mermaid, and of course the Musee Mecanique (which now resides at Fisherman’s Wharf). There was also music and dancing.

Suro only got to enjoy the full affect for a a couple of years. He passed away in 1898, at which point his daughter took the reins.

In 1907, Cliffhouse #2 (or #3 if you believe the lore) burned down. Two years later, a new one opened, more modest in scale, but heavily fireproofed and made of reinforced concrete, so as to avoid the fate of its two predecessors:

Meanwhile, over the decades there had been other attractions in the area we haven’t mentioned yet. Since the 1880s, various independent operators had brought various amuseument concessions to the nearby beach pavilion: a gravity railroad (prototypical roller coaster), a carousel, a shooting gallery etc. By 1926 there was a critical mass of rides and attractions and it was branded Playland-at-the-beach.

Other rides included a Shoot-the-Chutes, a ferris wheel, a diving bell (which took ticket holders under the water for a submarine experience). various rides acquired from nearby world’s fairs, and a famous funhouse with a rotating barrel, moving stairs, and the park’s most famous attraction, Laffing Sal, an eerie automaton whose cackling could be heard for miles around and who resides today at Fisherman’s Wharf.

Playland’s owners purchased the Cliff House in the late 1930s. New stuff was added over the decades. In 1947 Playland got its famous Camera Obscura, which is now located at the Cliff House. From 1955 through 1966 there was a Sky Tram that went out to Seal Rocks and back:

In 1963 and 1966 a pair of fires devastated the Sutro Baths, making it what it is now…an eerie but fascinating ruin. It’s now part of Golden Gate National Recreation Area. With the buildings gone it has merged into the natural landscape of caves and tunnels and cliffs and pools — probably as close an experience you can get to visiting Greece as you can get in America. 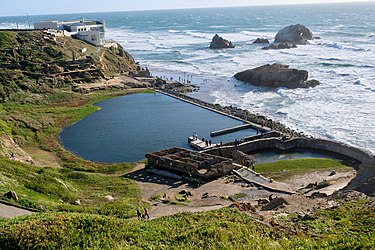 The Cliff House was acquired by new owners in 1964 and restored in 1973. Today it is a fashionable restaurant decorated with images and memoribilia of the old Cliff House and Sutro Baths.

As for Playland, much like Coney Island, it deteriorated throughout the ’60s and early ’70s. There were gang fights. It became sketchy. Hippies hung out there (I am emphatically pro-hippie, but as it happens it scared away the family trade). And so the plug was pulled Labor Day weekend 1972.

Did I mention ghosts? People swear they saw them in the Sutro Baths, which was large and spooky, at odd hours, even when it was still standing. Now that it is a ruin, even more so. The same is said of Playland. If that puts a bee in your bonnet, I can’t help ya. I think ghosts (and ghost stories) are fun.

Here’s an interesting factoid: after the 1989 earthquake, apparently, the sea lions stopped coming to this spot! They now go to the vicinity around Pier 39 at Fisherman’s Wharf. I guess that’s where all the action is.

To learn more about the histor of amusement, please see my book No Applause, Just Throw Money: The Book That Made Vaudeville Famous