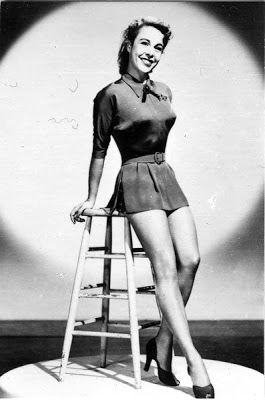 I’m sorry I missed Marge Champion’s more significant birthday last year but we’ll attempt to redress the wrong by bestowing maximum attention upon her today. What a remarkable life and career, and what a link between that age and this!

Born Marjorie Celeste Belcher in 1919, she was the daughter of Hollywood ballet master and choreographer Ernest Belcher, who worked on such pictures as The Phantom of the Opera (1925), The Merry Widow (1925), The Jazz Singer (1927), Why Be Good? (1929), and The Little Princess (1939) and taught such performers as Shirley Temple, Gwen Verdon and Cyd Charisse. Marge studied with her dad throughout her childhood and made her debut in a ballet at the Hollywood Bowl at age 11. Marge was also the half-sister of Lina Basquette, whose life and fate would be quite different, but no less eventful than her own.

For the first phase of her career, young Marge Belcher worked as  a movement model for Walt Disney, on Snow White and the Seven Dwarfs (1937), Pinocchio (1940) and Fantasia (1940). During this period (1937-40) she was married to animation artist Art Babbitt, creator of Goofy. She also appeared on camera in several films, the best known of which is The Story of Vernon and Irene Castle (1939) with Fred Astaire and Ginger Rogers.

Next she danced in three Broadway shows: What’s Up (1943-44), Dark of the Moon (1945), and Beggar’s Holiday (1946-47). There she encountered fellow dancer Gower Champion (1919-1980). Champion had been in a Vitaphone short and a couple of other films and had worked in night clubs and a few Broadway shows, originally with partner Jeanne Tyler. Marge now became his partner onstage and off. They married in 1947. When Gower choreographed the Broadway shows Lend an Ear (1948-50) and Make a Wish (1951), Marge was his assistant. At the same time they became a dance team on TV shows like The Admiral Broadway Revue and The Milton Berle Show and dozens of others , as well as the films Mr. Music (1950), the 1951 version of Show Boat, Lovely to Look At (a 1952 remake of Roberta,), Everything I Have Is Yours (1952), Give a Girl a Break (1953), and Jupiter’s Darling (1955),  In 1955 they performed together in the Broadway version of Three for the Show, directed and choreographed by Gower, which was also filmed.  In 1957 they had their own sitcom The Marge and Gower Champion Show, They continued to perform together on TV variety shows through 1959.

Things shifted in the 1960s when Gower focused on being a director/choreographer. Notable hits of his from this period included the original productions of Bye Bye Birdie (1960) and Hello Dolly (1964). Marge assisted him in the latter production. Meantime she went on to appear in films like Blake Edwards’ The Party (1968), as well as Frank and Eleanor Perry’s The Swimmer (1968) with Burt Lancaster, and the western comedy Cockeyed Cowboys of Calico County (1970). The Champions divorced in 1973. Gower went on to direct more Broadway shows like Mack and Mabel (1974) and 42nd Street (1980). Sadly he died the very day the latter production opened. It ran nine years — his greatest success.

Meanwhile, Marge proceeded to work as a choreographer, dance director and dialogue supervisor in films and TV. In 1975 she worked on two pictures, Day of the Locust, and Queen of the Stardust Ballroom. In 1977 she married Boris Sagal, a prolific TV director who also did the occasional theatrical film, the best known of which was 1970’s The Omega Man starring Charlton Heston. Sagal’s most prestigious TV work included mini-series like Rich Man, Poor Man (1976), Ike: The War Years (1979) and Masada (1981). Marge worked on the latter two series as well. Sagal was to die on the job in a tragic accident in 1981 while directing the mini-series World War III, when he exited the wrong door of a helicopter and had his head taken off by the rotary blades.

Hard to bounce back from something like this but Marge did. In 1982 she appeared on an episode of the popular TV show Fame. She continued to dance on tv specials through 1986, and did some choreography in the Broadway show Stepping Out in 1987. She continued to dance, and appear in films, tv and live performance for decades after THAT. Her last Broadway appearance was in the 2001 revival of Follies. Her last film appearance was in Woody Allen’s Scoop (2006). Her last appearance in a documentary film was in 2018!

To learn more about variety performance, please see No Applause, Just Throw Money: The Book That Made Vaudeville Famous.