On The Beatles “Help!”

I thought I would finish out August with a post on the Beatles’ Help! album, five years and three weeks after its Golden Anniversary. Well…I’ve done posts about all of their later records and there’s an argument to be made (an airtight one actually) that the transformations evident on Rubber Soul began in the album just before it. In fact, one of the songs from the British version of Help! wound up on the American version of Rubber Soul (“I’ve Just Seen a Face”). It’s a pivotal album, breaking much new ground, while also being the last of their records to have at least one foot in the past by containing cover versions of American songs (Larry Williams’ “Dizzy Miss Lizzie” and Buck Owens’ “Act Naturally”).

Help! is naturally the album that went with their eponymous second film. The American version, the one I first knew, was more technically a soundtrack album, with the flip side being orchestral music from the movie. In a way, this was as significant to the image and evolution of the Beatles as their own pop tunes. Partially modeled on the travelogue aspect of James Bond movies, Help! has the lads being chased by Indian Thugs out to acquire some sacred rings which Ringo has inadvertently acquired. And so this was the moment when the Beatles, especially George Harrison, became fascinated with Indian culture and music. The flip side of Help! in the American version has some of those Indian sounds. By the next album, Rubber Soul, Harrison had picked up a sitar himself, playing it on “Norwegian Wood”. The instrument also got a workout on Revolver and Sgt Pepper’s Lonely Hearts Club Band and on the 1968 B side “The Inner Light”. By that point Harrison had a solo career beyond the Beatles, and incorporated Indian sounds on his first solo album Wonderwall Music. Many of his records would include Indian instruments through 1973’s Living in the Material World. He would also produce records by his teacher Ravi Shankar. As for the rest of the Beatles, their deep involvement in Indian culture was mostly limited to the one ill-fated stay with the Maharishi Mahesh Yogi in 1968. But at any rate it all began with the experience of Help! This influential facet of the ’60s began with this movie and this record. 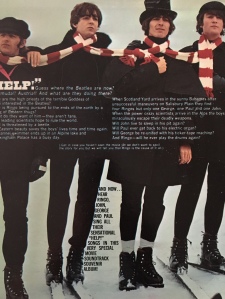 You can hear the sixties being born in other ways too on this record. The Beatles sound has mostly shifted; it’s already now the sound more definitively associated with Rubber Soul. Folk is a big influence. Acoustic guitars increasingly replace loud electrified rock sounds. The Byrds had broken onto the scene earlier that year, and Dylan (whom the Beatles had met the year before) was now going pop. Help!’s title track is the album’s biggest excursion into the genre of folk rock. (I recently heard a MOST illuminating demo of Lennon playing the song in a slow contemplative tempo in the “Imagine” style and a lightbulb went on. I’d often heard that was his original conception and it certainly makes more sense as a song that way. But the band was looking for hits, so they goosed it up, much the same as they had with “Please Please Me” very early in their recording career. The cheery version makes less logical sense if you try to make the energy match the minor chords and the lyrics, but it’s hard to regret the arrangement that resulted. It is IMMORTAL). Anyway this folk thread runs through the album. The most obvious track is Lennon’s “You’ve Got To Hide Your Love Away” which is a virtual Dylan impression, and which further includes a flute solo, making for a sophisticated sound that would later be associated with artists like Nico and Leonard Cohen. And let us not forget the most popular song in the history of the world (or something like that), McCartney’s “Yesterday” on which the singer accompanies himself on a single acoustic guitar, backed by a string quartet. Have you ever compared the songs “Help!” and “Yesterday” side by side? I have. The content of the songs are VERY similar. These young men being all sad and reflective about the past. There is something appealing about it (obviously). The third tune with the folkiest vibe on the record is the aforementioned “I’ve Just Seen a Face”, a fast moving, heavily picked workout with elements of country, skiffle and even bluegrass.

The other cool aspect of the record is that the band has expanded beyond the guitar-bass-drums line-up in other ways. new sounds abound. There’s Harrison’s playing with the volume pedal which adds a melancholy warmth to “I Need You” and “It’s Only Love” (one of my favorite Lennon songs, though he always disparaged it). And recall the cool McCartney-Harrison tandem solo on “The Night Before”. The three guitar players also all contribute some keyboard/organ/piano playing, if at a rudimentary level, giving the band a new sound, one that would influence all those garage rock bands that would copy them in the middle of the decade. This record really sounds like “the sixties” to me. So, the still-requisite boy-girl songs have a danceable quality. I’m thinking of things like “The Night Before” and the middle 8 of “Ticket to Ride”. The latter tune also has that unusual drumming pattern on the verses. One special aspect of this record has its roots in Ringo’s hospital-bound childhood. I recently read an interview wherein Ringo said he’d gotten his interest in drumming from a social worker who came to visit him while he was bed-ridden for months at a time and she introduced him to all of these percussive instruments like tambourines and the like. Help! has all of these interesting percussion instruments beyond the standard rock drum kit: tambourines, maracas, bongos, cowbells, claves, güiro. It stands to reason that Ringo’s openness to these novel approaches came from that experience as a kid — it was one way he was as valuable to the Beatles’ unique sound as his band mates.

One tune that’s missing from the album and the movie is Ringo’s “If You’ve Got Trouble”, a very quirky song, but funny and very Beatle-y and is an unfortunate loss because it sort of reflects the content of the film as well as Ringo’s connection to rings. It is said the Beatles felt the song wasn’t up to snuff. It’s hard to hear why (apart from the fact that Harrison’s solo is sort of weak, but that was frequently the case on songs they did release). At any rate, they switched out this tune and replaced it with the Buck Owens cover “Act Naturally”, which was to be the last cover song they formally recorded before the Get Back sessions four years later. As a teenager I used to move the needle over this song and thought it was boring. Nowadays I listen to it AVIDLY. It is a crystal clear opportunity to listen to the MUSICIANSHIP of the Beatles, to separate it from the element of their songwriting, and to hear what each guy contributes. The Ringo songs are often the best opportunities to do this. I love to listen to their rendition of “Act Naturally” because all four of them shine and show off their virtuosity with a good deal of showmanship and flash. Harrison’s Nashville style picking, Lennon’s VERY impressive skiffle style rhythm guitar (listen to those flourishes), and McCartney’s campy country background vocals, similar to the ones he does on the chorus on “I’ve Just Seen a face”. It’s very entertaining.

Another song that’s missing from the record is McCartney’s fairly dreadful “That Means a Lot” which recycles the “Ticket to Ride” beat and is just kind of monotonous and dumb. They gave the tune to another of Brian Epstein’s acts, P.J. Proby, who released it as a single.

Help! may not be the most artistically ambitious of the Beatles’ albums, but it’s one of my favorites to listen to. It captures a moment. Very shortly (by the time of Revolver) the band would be taking very different paths. At that point the lane the Beatles had occupied on Help! sort of became the domain of The Monkees. Don’t sneer. It’s accessible, it’s smart, it’s fun, and it makes a lot of people happy.