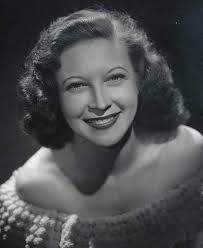 Let us begin by clarifying that Lurene Tuttle (1907-86) was also a prolific actress of the screen; it’s merely that she achieved a dominance in radio unmatched by her work in other media, though she was a recognizable figure there as well.

Tuttle was a third generation thespian, her grandfather having managed an opera house and taught drama, her father having traveled with minstrel shows in his younger years. Later, he worked for the railroads, which took the family from Indiana to Arizona and finally Southern California. Lurene traveled with a vaudeville company called Murphy’s Comedians, and played parts with the Pasadena Playhouse. She had a bit part as a stenographer in the 1934 film Stand Up and Cheer! before breaking into radio about 1936.

At the height of her radio career Tuttle had steady jobs on 15 different programs simultaneously, making her a sort of female Orson Welles, although she never produced a program of her own. Her voice could be heard on  The Adventures of Sam Spade, The Adventures of Ozzie and Harriet, The Great Gildersleeve, Dr. Christian, Duffy’s Tavern, One Man’s Family, The Red Skelton Show, Hollywood Hotel (with Frank Nelson), Dragnet, Lux Radio Theatre, The Whistler, etc etc etc.

Radio segued naturally into television. She was a regular on three different series: Life with Father (1953-55) with Leon Ames and a young Marion Ross; Father of the Bride (1962), also with Ames; and Julia (1968-71) with Diahann Carroll and Lloyd Nolan. She made numerous repeat appearances on Perry Mason, The Danny Thomas Show,  Petticoat Junction, and Trapper John M.D., and could also be seen in guest shots on live dramas in the early days and later things like Pete and Gladys, Leave it to Beaver, The Andy Griffith Show, The Munsters, The Jimmy Stewart Show, The Mary Tyler Moore Show, The Partridge Family, Little House on the Prairie, Fantasy Island, Murder She Wrote, and much else. She was known for playing nosy women, gossips, and similar characters.

Tuttle’s daughter Barbara Ruick was also in show business, a singer and actress and wife of movie composer John Williams. Learn about her here.

To learn more about vaudeville, please see my book No Applause, Just Throw Money: The Book That Made Vaudeville Famous.