For National Dog Day: A Leg Up on “Lassie”

How appropriate that National Dog Day falls during the dog days of August! Having already offered up close and personal peeks at Rin Tin Tin  and Pete the Pup, we thought it it only right that we should visit the most famous canine franchise of them all.

I grew up with the classic TV series, but, knowing that that wasn’t Lassie’s only screen incarnation I thought it might be useful in a minor way to break down the many versions, which all began with Eric Knight’s novel 1940 Lassie Come Home. Yes. Novel. Make of that what you will. Hey, my copy is dog-eared! I can only conclude that it has to be one of your better dog novels, with the deceptively smart shepherd dog rescuing some stranded people. I can only conclude that because, unless it’s the only book in a cabin I’ve been locked in by kidnappers it is unlikely that I will read it, but you never know. But people obviously, heh heh, lapped it up because it was rapidly adapted for the screen. And now I must apologize for being so flip because Knight did not live to see these films. In fact he died heroically in the service of his country. He was a Major in the U.S. Special Services during World War II, and wrote two installments of Frank Capra’s Why We Fight series. He was killed in a plane crash in South America at the beginning of 1943.

And now, to the Lassie-Log:

Audiences loved these family films so much there were seven in the initial series, and it helped many new stars get their start. The movies included Lassie Come Home (1943) with Elizabeth Taylor and Roddy McDowell, Son of Lassie (1945) with Peter Lawford and June Lockhart, Courage of Lassie (1946) with Taylor, Hills of Home (1948) with Tom Drake and Janet Leigh, The Sun Comes Up (1949) with Jeannette MacDonald and Lloyd Nolan, Challenge to Lassie (1949) with Gwendolyn Brooks, and The Painted Hills (1951) with Paul Kelly. Now: it must be immediately brought out that there is not a continuity amongst these films. They are not sequels. The only real thread that ties them together is that they all star the same border collie, whose name was Pal. In some of the films Pal portrays Lassie, but sometimes the pooch is named Bill or Shep. And the settings vary wildly amongst locales and even centuries. Certain actors, like Donald Crisp and Edmund Gwenn are in several of the films. Also making appearances in the various Lassie vehicles of the period: Dame May Whitty, Nigel Bruce, Alan Napier, Elsa Lanchester, J. Pat O’Malley, Frank Morgan, Harry Davenport, Leon Ames, Reginald Owen, Percy Kilbride, Margaret Hamilton, Chief Yowlachie, and Carl “Alfalfa” Switzer.

True story! After the films, Pal’s owner and trainer Rudd Weatherwax brought the star canine out for appearances at rodeos, state and county fairs, and wild west shows to perform tricks and pose for photo ops with fans. This brings us close to a vaudeville/ circus like phase for the character, reminiscent of the career of Rin Tin Tin. Weatherwax also trained Spike, the dog in Disney’s Old Yeller (1957) and was the uncle of Ken Weatherwax, who played Pugsley on The Addams Family. Rudd Weatherwax also narrated the Lassie radio program which ran on major networks between 1947 and 1950 — and I’m going to go ahead and guess that a good deal of narration was required.

Boomers and Xers like me know Lassie primarily from this TV incarnation, which ran for nearly 20 years. Former child star Bonita Granville was one of the key producers! Like the films (and like any long-running series), the premise kept changing.  First (1954-57) Lassie belonged to a boy named Jeff on a farm. Then (1957-64) she belong to a boy Timmy on another farm. Many probably consider this the “classic” leg of the series, when the cast included many well-known faces, like Cloris Leachman, June Lockhart, George Chandler, and Andy Clyde. From 1964 through 1970 the premise was that Lassie worked with rangers at the U.S. Forest Service, presenting many opportunities for hair-raising rescues. During 1970-71 there was one experimental season where Lassie was just a stray wandering around on her own, much like the 1963 Disney Film The Incredible Journey. Finally,1971-73, Lassie lived with a family on a ranch. One of the cast members from this period was Larry Wilcox, later of CHiPs. Numerous dogs played Lassie during this phase of the franchise. Also during the run of the series, several TV movies were cobbled together from episodes, and naturally the show was syndicated after new episodes stopped being produced.

Five years after the TV show went off the air, Granville teamed up with William Beaudine Jr to produce The Magic of Lassie, a musical film that featured lots of old time Hollywood talent including Jimmy Stewart, Mickey Rooney, and Alice Faye (in her last role) as well as Pernell Roberts, Stephanie Zimablist, and Mike Mazurki. 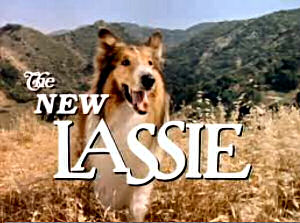 In the wake of nostalgic shows like Still the Beaver, it was probably inevitable that we’d get a new Lassie after a respectable cooling off period. Given that it starred real-life husband and wife Christopher Stone and Dee Wallace from Cujo and other horror films, one might have been forgiven for experiencing trepidation at just how “new” this Lassie would be, and what it would get up to. Perhaps the family would train it to kill, kill, kill on command? One of the kids on the show was played by Will Estes, later of Blue Bloods, who was going under his birth name of Will Nipper at the time. Nipper — also a very good name for a dog. 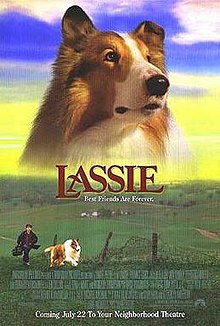 Now that is a mutt pedigree! But lest we turn up our noses, the supporting cast includes such major talent as Peter O’Toole, Edward Fox, Jemma Redgrave, Kelly Macdonald, and Peter Dinklage. With that cast, you couldn’t switch the script out and give ’em all something more substantial to chew on? King Lear, say? Oh, well as Hamlet says, “the Dog Will Have its Day”.

There have been other version and appearances over the years, but these are the main ones, I think. Time to bury this bone and frolic in the meadow.