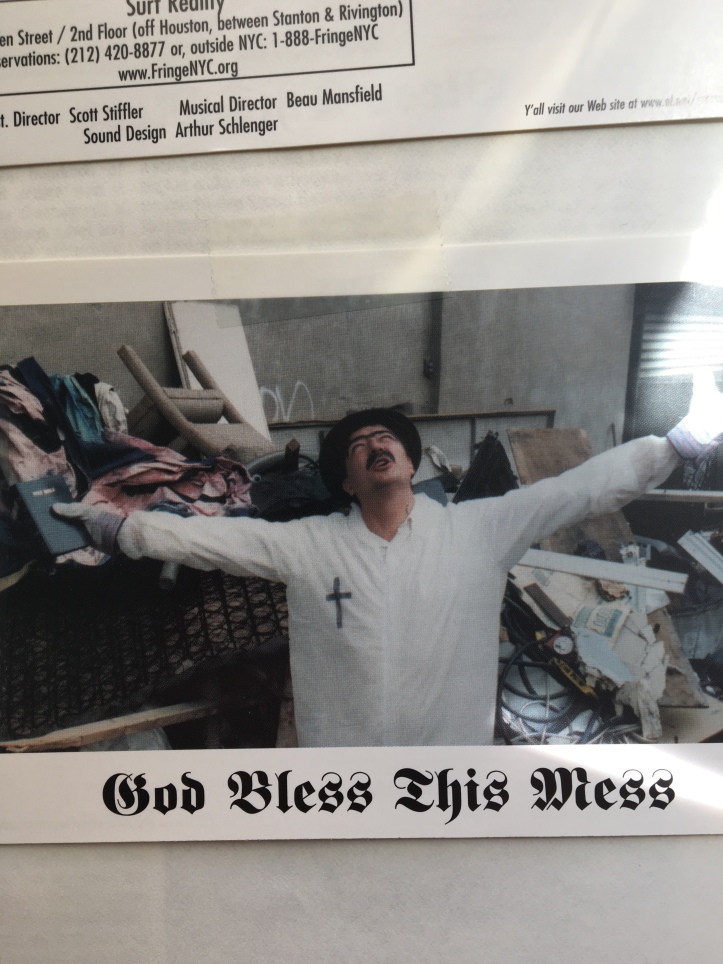 Well, now: in the heat of current events we are apt sometimes to neglect benchmarks. Today marks the 20th anniversary of the opening of my play House of Trash in the 2000 New York International Fringe Festival. It was my second Fringe NYC show (out of like 8 now I think), and the second production of House of Trash.

The first had been at HERE Arts Center in January of that year, with a longer script and a different cast. Early drafts had emerged as early as 1995. I held readings that were as unwieldy as four hours long! My NYU chum Drea de Matteo (later of The Sopranos, Desperate Housewives, and Joey) was in one of the early readings.

While many of my one act plays had been produced in NYC and elsewhere since the mid ’80s. House of Trash was my first full length to get on the boards. I threw everything, including the kitchen sink into it. It draws from my own life, ancient Roman comedies by Plautus and Terence, The Group Theatre’s House of Connelly, old time Toby shows, Manson Family lore, trucker chic, and a variety of country and folk artists, whom I parodied in original songs. Some of them are up now on Soundcloud (go here). Also a guy in a gorilla suit was in the show, And we gave out free whiskey!

Downtown legend Rev Jen Miller was in both casts, as were my Surf Reality cohorts Gilda Konrad (a frequent collaborator of mine back then) and the divine Loren Kidd.  Hank Flynn, a rock star of a performer, is now a local TV reporter down in Philly. Jonathan Weichsel now works in the horror field — he’s worked in various capacities in indie horror movies (including acting) for years.  It’s very mysterious to me that my best friend Robert Pinnock didn’t wind up on the postcard despite the fact that he was central to the show, so I will insert this photo of us: 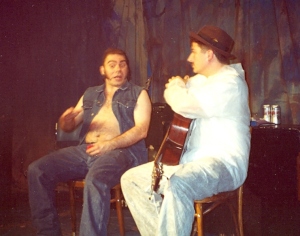 House of Trash got good reviews and good crowds, and I have long wanted to make some regional productions happen but got distracted by other things as is my wont. Actually, there WAS one regional production out in Minneapolis; it went up shortly after 9/11 in late 2001. 9/11 was one of the things that distracted me. Then came major changes in my personal life and then my first book…which changed everything a great deal. But several other full-lengths followed over the years; they’re all my babies, and I want them all out there. Maybe some day when theatres re-open you can see this one somewhere. It has a “dark heart of white folk in the heartland” that I think may speak to our times in particular.