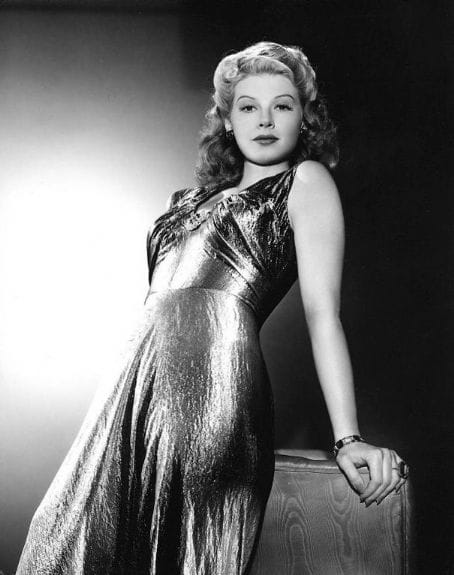 I became aware of actress/singer Irene Manning (1912-2004) via performances in two show biz bio pics. The first, a somewhat, snooty one dimensional portrayal of Fay Templeton in Yankee Doodle Dandy (1942) is without a doubt the best known performance of her career. Two years later she played a character named “Blanche Mallory” in Shine On, Harvest Moon, a film about Nora Bayes an Jack Norworth starring Ann Sheridan, Dennis Morgan, and Jack Carson.

Born Inez Harvuot in Cincinnati, she trained for opera at Rochester’s East School of Music. After some initial experience in live theatre she broke into films in 1936 at Republic Studios under the handle Hope Manning. Her first film was the music western The Old Corral (1936) opposite Gene Autry. This was followed by the comedy Two Wise Maids (1937) with Polly Moran and Alison Skipworth (in a role that surely would have belonged to Marie Dressler had she not passed away a couple of years earlier), along with Luis Alberni, Lila Lee, and Slapsie Maxie Rosenbloom. She had been third-billed in the latter film, but only got a sixth billed supporting part in the drama Michael O’Halloran (1937), her last for Republic. In 1939 she appeared in the short lived Broadway show Susanna, Don’t You Cry.

Yankee Doodle Dandy (1942) marked her return to movie screens, now billed as Irene Manning. Her four year high water mark during the WW2 years took her through ten films, as well as U.S.O. tours, performances and recordings with Glenn Miller, and popularity with servicemen as a pin-up. Her other pictures from the period included Spy Ship (1942); The Big Shot (1942, opposite Humphrey Bogart); The Desert Song (1943, with Dennis Morgan); Shine On, Harvest Moon (1944); Make Your Own Bed (1944) with Jack Carson, Jane Wyman, Alan Hale, and George Tobias); The Doughgirls (1944), with Ann Sheridan, Jack Carson, Jane Wyman, Charlie Ruggles, Eve Arden, and Alan Mowbray; Hollywood Canteen (1944), Escape in the Desert (1945), and an appearance as herself (as a USO singer) in the British wartime film I Live in Grovesnor Square (1945).

After a turn in the Broadway show The Day Before Spring (1945-46), Manning returned to London to star in the West End shows The Dubarry and Serenade. In the late ’40s she got her own BBC television show An American in England, which lasted through 1951.

In the early ’50s, she performed on American television for a time, on The Passing Show, The Paul Winchell Show, Schlitz Playhouse, The Philco Television Playhouse, Ponds Theater, and Producers Showcase. Her last TV credit was in 1955. After this she performed in nightclubs for a number of years, then became a teacher of voice and acting.

To learn more about show biz history please see No Applause, Just Throw Money: The Book That Made Vaudeville Famous.