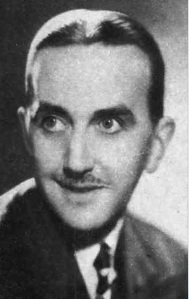 Comedy writer Wilkie C. Mahoney has one champion on this world, and a fierce one it is. Journalist Bob Sarber knew him personally as a family friend when he was growing up. Nine months ago, when such a thing was still possible, Bob told me story after story about Wilkie as he drove me along the Pacific Coast Highway to show this Eastern dude the California country he knows and loves so well. It all culminated with a talk at the History Center of San Luis Obispo County, drawn from Bob’s research on Mahoney for a projected book, which we chronicled here. At any rate, Bob is the only person to write a Travalanche entry on Wilkie Mahoney, which he has generously done. The foregoing is from his pen:

Wilkie Mahoney was was at born the family homestead in San Miguel, California, on this day in 1897. His name frequently appeared in the entertainment gossip columns and on movie posters throughout the 1930s and ’40s but these days it’s more often mis-associated with the old vaudevillian Will Mahoney than attached to an A-List comedy writer during the golden ages of Broadway, radio and film.

Wilkie entered comedy writing out of desperation in the early 1920s after discovering that he could make more money selling jokes to the most popular comedy magazines of the day than as an extra in Hollywood films. He plunged full-time into the new career in 1930 when he accepted an editorship at Captain Billy’s Whiz Bang magazine — the Mad Magazine of its day — and left behind an acting career that totaled little more than an appearance in the 1927 Hal Roach-produced Laurel and Hardy short The Battle of the Century.

Any second thoughts about becoming a writer would end on the night in 1936 when Wilkie sold Milton Berle the first joke that the notoriously penny-pinching, joke-thieving comic ever paid for.

Wilkie was sharpening his comedy chops in magazines just as former vaudeville stars were landing lucrative radio shows that required sharp writing. Wilkie began sending stuff to Ben Bernie in the early ’30s while “The Ol’ Maestro” and entertainment gossiper Walter Winchell were carrying out a faux feud as part of a cross-promotional effort. Wilkie was actually writing both sides of the insults being tossed back and forth.

Bernie brought Wilkie to New York, where the rising gagman sold that first joke to Berle and also pitched others to Ed Wynn. Wilkie was writing 8,000 original gags a year before he moved back to the West Coast in the fall of 1937 and began his association with Broadway star Bob Hope, who hit town needing a writer for his L.A-based radio shows.

Wilkie had been writing for Al Jolson when Hope came calling and he broke the news gently, according to Winchell’s account in his syndicated newspaper column, “I like this: Wilkie Mahoney, the gag writer, quit Jolson to work for Bob Hope. He gave Jolson one of those ‘To Whom It May Concern’ letters recommending Jolson to anyone who wanted a good boss…Cute, huh?”

In his book, Have Tux Will Travel, Hope remembered, “Two or three nights a week, Wilkie would drop in; we’d figure out what we were going to talk about then we’d sit down and kick it back and forth, with Wilkie at the typewriter tapping out the parts we thought usable.”

Hope brought Wilkie onto the lot at Paramount and set him up to write screenplays or dialogue for six films, including Thanks for the Memory in 1938, Some Like It Hot and The Cat and the Canary in 1939, and 1941’s Caught in the Draft. 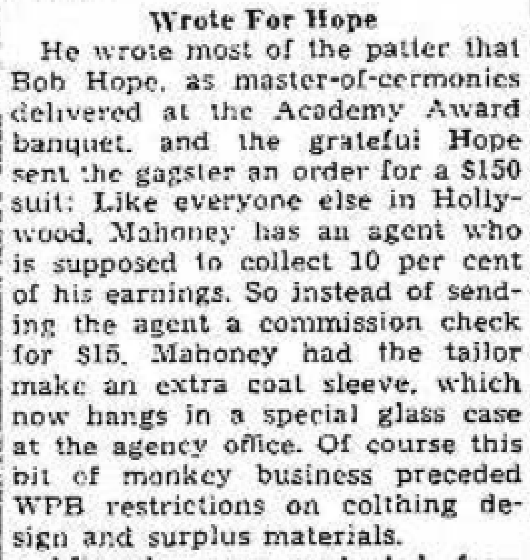 Perhaps Wilkie’s most enviable achievement came with his participation in the 12th Annual Academy Awards show. Hope was hosting the Oscars ceremony for the first of his record 19 times and relied on Wilkie to write his patter on an historic night that honored the greatest year in Hollywood history.

In 1942, Wilkie was hired the chief comedy writer at MGM and immediately helped script the Red Skelton films Whistling in Dixie and Panama Hattie. A second MGM musical that Wilkie wrote for, 1943’s Du Barry Was a Lady, matched Skelton alongside Lucille Ball. The same year, he gagged up Whistling in Brooklyn.

Wilkie retired to San Luis Obispo, California, in 1952 and found satisfaction in sending unsolicited quips to the three newspaper columnists he respected the most — a trio that included Herb Caen of the San Francisco Chronicle, whose daily musings and observances earned him a special Pulitzer as the “voice and conscious” of his city.

To learn more about vaudeville, please see No Applause, Just Throw Money: The Book That Made Vaudeville Famous, and for more on classic comedy please read Chain of Fools: Silent Comedy and Its Legacies from Nickelodeons to Youtube.