The Forde Family in Films

Today we write of a family that figured in films for a time.

The father, Arthur Forde (sometimes billed as Arthur Hanna Forde, 1871-1952) would prove to be the most minor. Originally from Plymouth England, he was an actor/manager on the stage and had about a half dozen screen roles 1912-1917, mostly bit parts. He was out of the picture by 1920 when his wife remarried.

The wife, Eugenie Forde (1879-1940) was a New York stage actress who’d appeared in the Broadway play Terence with Chauncey Olcott in 1904. Also in the cast of that show was one “Dolly” Forde. Dolly might have been an early professional name for Victoria Forde (1896-1964), her daughter. Steve Massa’s Slapstick Divas informs is that both acted in stock and touring companies early in the century and they toured vaudeville together in a sketch called “Mrs. Danforth’s Experience”. Then apparently, Eugenie lost her voice. Both Forde females went into films early in the next decade, and comedies would figure significantly in their careers. In 1910, Victoria, age 14, was cast in Biograph’s Love in Quarantine, with Mack Sennett, Owen Moore, and Blanche Sweet. Both women began appearing in Nestor Films in 1911 under the direction of Al Christie. Eugenie started out in a series of “Desperate Desmond” comedies opposite William Ehfe. Victoria was to be the bigger star at the studio, starring in over a hundred comedies through 1915, often opposite the likes of Eddie Lyons and Lee Moran. She must have had a terrific personality. She had one very pronounced lazy eye that’s not the slightest bit subtle (hence, comedy). It’s very close to Marty Feldman territory. 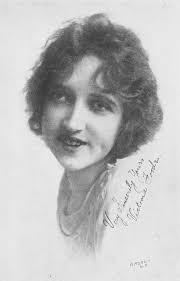 Victoria then went over to Selig, where she was cast in westerns with Tom Mix. In 1917, the couple signed with Fox and married the following year, whereupon Forde retired to raise their children. She had appeared in nearly 200 films at the time she left the industry. Eugenie continue on a a supporting character actress in both shorts and features for a variety of studios through 1927. You can see her in such fare as Sis Hopkins (1919) with Mabel Normand, A Riding Romeo (1921) with son-in-law Tom Mix, and several comedy shorts with Dorothy Devore. Her last film was the independently made Willful Youth, released at the end of 1927. She appeared in over 100 films.

Even as Eugenie was leaving films, her son and namesake picked up the baton, Eugene “Gene” FORDE, (1898-1986) acted on stage with his family as a child. He also co-starred in one film, The Innocence of Lizette (1916), second billed to Mary Miles Minter. But he was to make his true mark a decade later when he began directing movies. He started out making comedies for Fox in 1926 with the likes of Eddie Clayton, Alice Howell, and others. He rose rapidly to taking the reigns of western features, starring — you guessed it — Tom Mix.

Victoria divorced Mix in 1931. In 1940 she was to suffer a double blow when both Mix and her mother passed away in the same year (Mix in a horrible car accident)

Meanwhile, Eugene continued to be a workhorse for 20th-Century Fox through 1947, directing B movies like several in the Charlie Chan series (five of them), the comedy Step Lively Jeeves (1937) with Arthur Treacher, and numerous crime dramas. In the early 1950s, he did a little TV work before retiring.

To learn more about vaudeville, please see No Applause, Just Throw Money: The Book That Made Vaudeville Famous, and for more on silent film and classic company, please read Chain of Fools: Silent Comedy and Its Legacies from Nickelodeons to Youtube