Those who visit New York’s Broadway district may have had occasion to encounter the Al Hirschfeld Theatre (302 West 45th Street). As a vaudeville fan I was pretty irate in 2003 when the owners removed the name of the man who built it, Martin Beck, but there is more than sufficient justice to name a venue after Al Hirschfeld, show business’s premiere caricaturist for most of the 20th century. Hirschfeld was above all associated with Broadway, but he also drew hundreds of film, radio and TV stars and other celebrities in his bold, sweeping, economical hand. He had the kind of style most people can identify in an instant.

Originally from St Louis, Hirschfeld studied at the Art Students League and in Paris in the twenties. His first gig at the New York Herald Tribune led to his best known one at The New York Times, where he worked for seven decades. He was also published in The New Yorker, The American Mercury, Colliers, Playbill, and many others. His work was published in many books, including several collaborations with humorist S.J. Perelman. In 1945 his daughter Nina was born. After that, one of Hirschfeld’s signature moves was to hide her name in all of his drawings, the many vertical lines in the four letters easily blending in with features like hair, or folds in clothing. (A nice detail for Father’s Day, eh?) 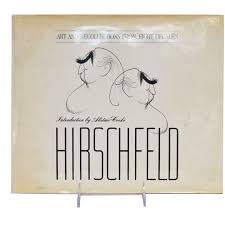 In 1991 I not only got to meet Hirschfeld, but to enjoy his hospitality when myself and some fellow booksellers went to his home where he signed copies of his book Hirschfeld: Art and Recollections from Eight Decades. He was a young whippersnapper of 88 at the time, totally sharp, funny, energetic, and very generous. Sadly his wife of 52 years, actress Dolly Hass died in 1994. Two years later, Hirschfeld did what any 93 year old man would do — remarried.

My friend David Leopold runs the Al Hirschfeld Foundation; learn much, much more the beloved theatrical artist there.

In my books No Applause, Just Throw Money: The Book That Made Vaudeville Famous, and Chain of Fools: Silent Comedy and Its Legacies from Nickelodeons to Youtube you can learn much more about many of the stars Al Hirschfeld drew.