For roughly half a century the Haag name was a force to be reckoned with in the realm of American traveling shows, especially in the Southeast.

Founder Ernest Haag (1866-1935) was the son of German immigrants. He grew up in Plymouth, Indiana, but lit out for the road in his early teens, traveling as far north as New York. He bummed around in odd jobs, hawking newspapers, shining shoes, traveling with small circuses. Then he attempted his first fledging operations, a tiny minstrel show, and a sideshow at a fairgrounds. In 1890 he founded “The Big Show”, which performed on a floating barge on the rivers around Shreveport, Louisiana. After working the river system on his barge he transferred his operation to wagons pulled by horses and mules and moved it out over the roads. He began using the name The Mighty Haag Shows in 1895, tweaking it slightly with variations over the years. He gradually expanded his orbit to include Mississippi, Tennessee, Kentucky, Kansas, Oklahoma, et al. Eventually they went as far North as Canada and as far west as Montana.

In 1909, the outfit had gotten so big he began to move it by rail on its own dedicated train. His menagerie (and performing animals) included elephants, camels, lions, tigers, bears, an ocelot, a hyena, monkeys and ponies. Everett James was the bandleader. His son, big band leader Harry James, grew up with the show. At its height, the circus had a company of 100. In later years they moved the show by truck: 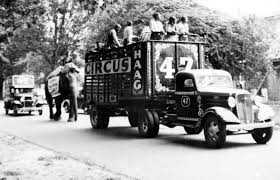 After Haag died in 1935, some of the company split and formed The Bud Hawkins Circus. Haag’s son and nephew formed The Haag Brothers Circus, which lasted until 1939.

To learn more about variety arts, including the circus, please see No Applause, Just Throw Money: The Book That Made Vaudeville Famous,