Lulu, Queen of the Air: Drag Acrobat of the 19th Century

Lulu, Queen of the Air was one of the star acts presented across America and Europe by The Great Farini in the late 19th Century. The not-so-well-kept secret: the lass was a lad.

Lulu was originally Samuel Wasgatt, from Mount Desert Island, Maine. In 1866 when still quite a young boy he was adopted by The Great Farini, showman and acrobat, and began performing as his “son”, El Nino Farini.

One of his show-stopping stunts was to play a snare drum while hanging from a trapeze by his chin: 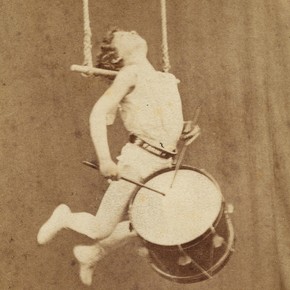 Long about 1870, a new dodge was tried. Farini began billing young Sam as “The Beautiful Lulu, Girl Aerialist and Circassian Catapultist”. “Circassian” was to take advantage of the vogue for “Circassian Beauties” started by P.T. Barnum. “Catapultist” refers to his device for shooting people into the air (usually disguised as a cannon). One of his other acts who performed this stunt was the biological female known as “Zazel”. And naturally there was advantage in billing Wasgatt as female as well — it somehow seemed more impressive that a girl could perform these death-defying feats.

In this guise, he/she toured throughout North America and New York, and was much written about in the press. No less than Lewis Carroll raved about her/him. I use both pronouns here because there was EXTREME ambiguity about Lulu/Wasgatt’s gender for at least for a few years. Our subject went as “Lulu” for nearly a decade, even offstage, BUT revealed himself to some to be male in most of the usual ways. He married Farini’s sister Edith Hunt in 1875 and fathered a child by her. In 1877 he fell off the trapeze and had an accident, providing a physician the opportunity to glimpse his actual anatomy. And there were leaks about these things to the press. In 1878, he ceased to perform as Lulu, cut his curly locks and grew a ‘stache, through the tights and tunic he sported still look a good deal like drag. 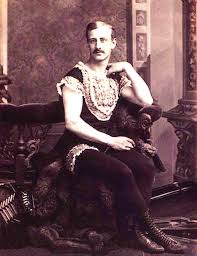 In 1883 Wasgatt retired from performing and went into photography with his brother Lycurgus. In 1885 Samuel accompanied Farini on an expedition to the Kalahari desert to acquire Bushmen to exhibit in the States. As we wrote here, there was a vogue at the time for showing people from the four corners of the earth in anthropological exhibits. The most famous of Farini’s acts along this line was Krao, the Missing Link. While, Farini’s expedition seems not to have been successful in acquiring any human beings, Wasgatt’s photographs of the journey have come to be regarded as important historical documents. He and Farini also acquired a good deal of attention by claiming to have discovered a “Lost City”, which by popular consensus has come to be regarded as a mere rock formation. In the 1890s, Wasgatt operated a photo studio in Barnum’s hometown of Bridgeport, and later moved to New York. He died in 1939.

Much more info on Wasgatt, a.k.a. Lulu can be found in this excellent article.

To learn more about the variety arts, please see No Applause, Just Throw Money: The Book That Made Vaudeville Famous,