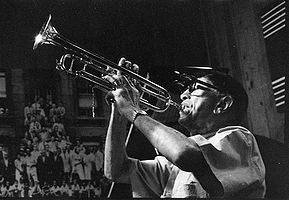 It is disappointing to learn that Doc Cheatham was not the name of a medicine show huckster — could there ever be a better one? But Doc (Adolphus Anthony Cheatham, 1905-1997) was a jazz musician, bandleader, and singer, whose career encompassed some 70 years and every style that came along during that long period.

Cheatham was a mix of African, Cherokee and Choctaw lineage. Born and bred in Nashville, he originally intended to become a pharmacist, the source of his nickname. He started out playing in pit bands on the TOBA (black vaudeville) circuit. While best known as a trumpeter, he also played saxophone when the occasion arose. In 1924 he moved to Chicago, where he was strongly influenced by the music of King Oliver and Louis Armstrong. In his early years he backed performers like Ma Rainey and Cab Calloway, and played with the bands of Benny Carter, Teddy Wilson, Fletcher Henderson, and Benny Goodman, in addition to leading his own band. For a time in the post-war period, he played with several Latin bands. During his last couple of decades he added singing to his act as well, and he became one of those grand old men of jazz (like Armstrong, Eubie Blake, Dizzie Gillespie, and others) enjoying the greatest stardom of his career. If you google, you’ll find that all the photos and recordings (dozens of them) are from the ’70s, ’80s, and ’90s! He died just short of his 92nd birthday, and was working right up until the end.

To learn more about vaudeville, please see No Applause, Just Throw Money: The Book That Made Vaudeville Famous,