Wild and crazy world it is for someone of my (unspecified) age, in which the names Basil Rathbone and Sherlock Holmes are no longer synonymous. Yes, many actors have played Arthur Conan Doyle’s classic character before and since (as the Mad Marchioness chronicled here), but for many, many decades, Rathbone owned it, in much the same way we once associated Bela Lugosi with Dracula and Boris Karloff with Frankenstein. It wasn’t until the 21st century really, when multiple high profile franchises launched simultaneously, that Rathbone’s stranglehold on the public imagination was finally cracked. On a personal level, it cuts in the other direction too. Rathbone had also appeared in dozens of other roles in other pictures, and I knew some of them in my youth, like The Adventures of Robin Hood and Son of Frankenstein, but today’s boon in access has allowed me to see him by now in TONS of other roles outside the Holmes universe, so that I no longer reflexively picture him in a deerstalker cap any more. Unthinkable!

As is often the case, the first is probably the best. Hilariously, the now forgotten Richard Greene gets top billing as Sir Richard Baskerville. Rathbone was at best known as a supporting player until this point, usually as villains opposite Errol Flynn in swashbucklers (although he had played Philo Vance once nearly a decade before.). It was no doubt a daunting prospect for Rathbone. Until this point, Holmes was primarily associated with the actor William Gillette, in much the same way that Rip Van Van Winkle had been associated with Joseph Jefferson, and The Count of Monte Cristo with James O’Neill. But Rathbone’s conscientiousness paid off. He was widely hailed as the definitive Sherlock Holmes, and remained so for the rest of the century. Many others played him, but their performances were always in dialogue with his characterization. Less loved by purists, but a popular hit with audiences was Nigel Bruce’s comic characterization of Watson as a fumbling, addle-pated ninny. That’s good sidekick stuff, as fans of westerns know, but isn’t quite what Doyle conceived…it’s better schtick for Inspector Lestrade, the Scotland Yard man who helplessly stands by as Holmes solves his cases and later gets all the credit (usually played by Dennis Hoey in the ’40s). One of the pleasures of The Hound of the Baskervilles is that it plays almost like a horror movie, undoubtedly one of the reasons Hammer Studios later remade it. Also in the film are Lionel Atwill, John Carradine, and Wendy Barrie. But as we all know, the film belongs to Richard Greene. 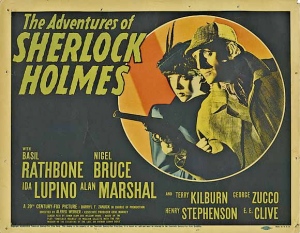 The Adventures of Sherlock Holmes (1939)

Unlike its predecessor, this film is not an adaptation of any specific Holmes story, but draws from several. (It claims to be based on Gillette’s adaptation, but it shares virtually nothing from it). George Zucco plays arch-villain Moriarity in this one; their rivalry is at its center. A young lady (Ida Lupino) fears for her life, but this entire plot proves a ruse to divert Holmes from Moriarity’s true quarry — the Crown Jewels. The climax at the Tower of London reminds us that Rathbone had played a key role in that eponymous film the same year.

Sherlock Holmes and The Voice of Terror (1942)

The gap of three years between films is explained by the fact that this film launches an entirely different series at a completely different studio. The first two films had been period-appropriate set pieces and made at 20th Century Fox. This new series, at Universal, was set in the (then) present day, the 1940s equivalent of Elementary or Sherlock. Historically, it makes the films more exciting than they might otherwise be, because World War Two was on at the time, so the villains (as in this one) were often Nazi spies. The dozen films of this series were basically B movies, very much like the popular radio shows of the day, and presaging the format of television mysteries. While these films often took an element or two from the original stories, they usually diverged quite a lot from the Doyle tales. In this one Reginald Denny plays a turncoat who sends Nazi messages via radio broadcasts, Henry Daniell and Montagu Love are also in the film.

Sherlock Holmes and The Secret Weapon (1943)

Lionel Atwill plays Moriarity in this — so evil in this one that he conspires with Nazis to steal the titular weapon, which isn’t too sexy — a bombsight of unprecedented accuracy. As he often does in the films, Holmes goes in disguise several times. The Indian guise he assumes at one point is less than fortunate.

As the title warns, this is already pretty shark-jumpy. Holmes and Watson fly to DC to retrieve a microfilm containing a stolen secret document. George Zucco and Henry Daniell also in the cast. 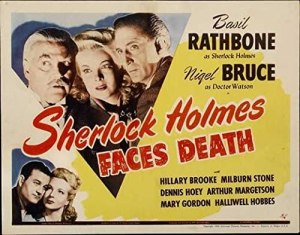 While World War Two still permeates the story, this is a return to the old-fashioned murder mystery format, and is a loose adaptation of “The Adventure of the Musgrave Ritual” (1893)

This one truly has the old-fashioned stuff, smashing together several of Doyle’s tales, arriving at a story about a Black Widow (Gale Sondergaard) who uses deadly spiders to kill men for insurance money, and to cover her tracks. Like Baskervilles it’s one of those ones that seems to blend together horror and mystery. And for maximum political incorrectness not only does Holmes return in his “Rajni Singh” disguise, but Little Angie (Angelo Rossitto) plays a pygmy!

Though not identified as such this one borrows pretty heavily from The Hound of the Baskervilles, and is considered by most to be the best of the Universal series.

The legendary Rondo Hatton plays The Hoxton Creeper in this one, committer of many gruesome murders. It’s based on “The Adventure of the Six Napoleons”. A stolen pearl is hidden in one of the titular busts of the Emperor. One by one, the owners are dispatched as so much collateral damage. Look for Billy Bevan as a local constable! 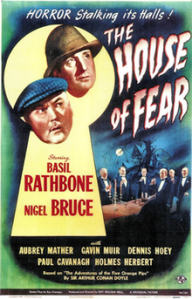 This one much more resembles Agatha Christie’s Ten Little Indians than any original Holmes tale. Seven housemates at a Scottish country estate are killed off one-by-one, in a variety of creative ways. Known as the “Good Comrades”, they prove not to be so good after all.

Henry Daniell is Moriarity in this one. His nefarious scheme — to murder women and hypnotize their husbands so they think they did it, placing their wives’ severed forefingers in their pockets for good measure. The purpose of this bizarre campaign? Blackmail. For an international supergenius of crime, Moriarity sure could have used the advice of an efficiency expert. 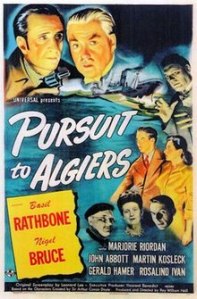 Holmes acts as bodyguard to a prince of a fictional country en board a cruise ship. The motley crew of suspects include a beautiful singer, a circus knife thrower, a pair of archeologists, and a mute giant played by professional wrestler Wee Willie Davis.

This one resembles Agatha Christie’s Murder on the Orient Express in some ways, but also draws from three Holmes’ stories. It involves a murder and the theft of a diamond on a train bound for Scotland. Alan Mowbray is in the film and Billy Bevan plays a ticket collector!

This one concerns stolen printing plates for bank certificates hidden in some music boxes, which I think you’ll agree translates into “creative exhaustion”. It wasn’t until the 1970s that many filmmakers began to dare to play around with Holmes again. Read about many of those versions here.