This is Tom Jones 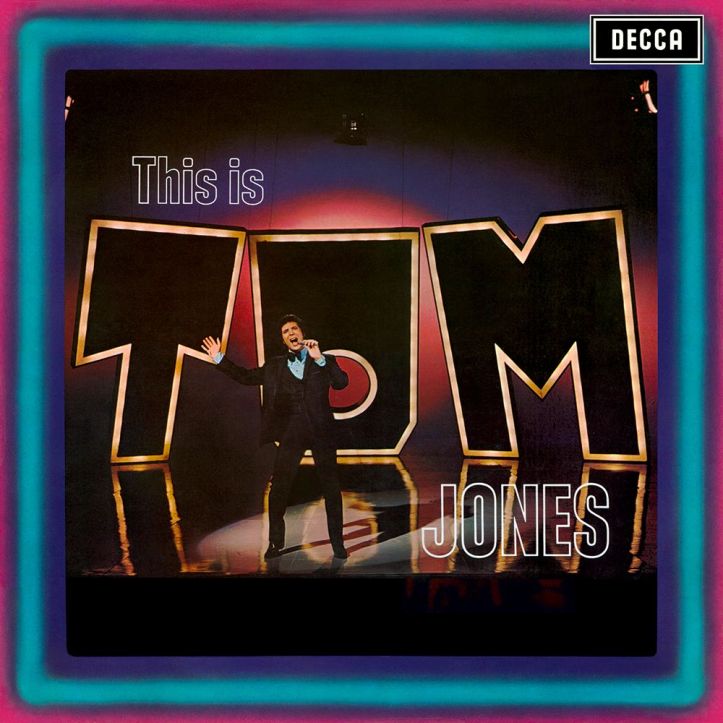 To someone who was born at the same time as the Tom Jones phenomenon (1965), it was always disorienting to learn that that was the case, i.e. that he hadn’t been around much longer. I would describe him as a pop singer, with the occasional injection of “soul”, I suppose, but the same can be said of Sammy Davis Jr.  He’s really not a rock and roll or counterculture guy, yet he was born the same year as John Lennon and Ringo Starr and came to fame AFTER the Beatles, and that’s what’s disorienting. Around the time I first became really aware of Jones (say around 1973), he was already a nostalgia act. Little old ladies LOVED him. Little old ladies wanted to DO it with Tom Jones. Though he was from the UK and a few years younger, Tom Jones was much closer in spirit to Elvis, especially at that time, with the jump suits and scarves and jewelry and sexual suggestiveness, but again NOT in the manner of say Robert Plant or Roger Daltrey. He was the Welsh Elvis…the Elvish, or Welvish, if you will. In fact the two guys were pals. Elvis liked and understood Jones way better than the Beatles, whom he gave the cold shoulder to despite recording a couple of their tunes. After all Elvis, was from cotton country, Jones was from coal mining country. Somehow they were on the same wavelength, yet though I was way into late period Elvis, Tom Jones filled me with nothing but revulsion, with all his breathing and moaning and old-fashioned, corny songs. He was “legit” in the way that all those Vegasy ’40s pop stars were. He was like a lounge singer, and he dressed like Bert Convy. There was nothing like, say, “Hound Dog” in the Tom Jones cannon. But among other things he was a variety TV phenomenon so we give the Devil his Due. 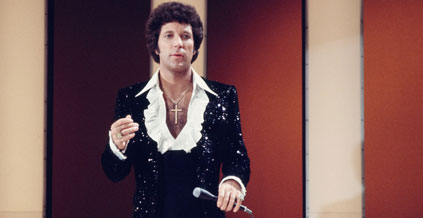 Born Thomas John Woodward, he took his stage name from the hit 1963 Tony Richardson comedy, based on Fielding’s novel about a naughty but lovable stud. And he had monster success coming right out of the starting gate. “It’s Not Unusual” was his first huge, hit single, followed quickly by the theme songs to two hit movies, Woody Allen’s What’s New Pussycat? and the James Bond thriller Thunderball, all in 1965. Then came a country song “Green Green Grass of Home” (1966) ,and  the soul tinged “Detroit City” (1967). The high melodrama, Spanish sounding, over the top “Delilah” became his crowd-pleasing show stopper. The much-covered gospel-driven “Without Love (There is Nothing)” came next (1969).

For three seasons, 1969 through 1971, Jones had his own TV variety show This is Tom Jones, featuring comedy by Ace Trucking Company, with major guest stars every week. The highlight of most episodes would be a duet between Jones and another major singer. There was a legend almost every week, whether it was Ella Fitzgerald or Ray Charles or somebody younger like Janis Joplin or Liza Minnelli. Fairly unusual for the time, the show aired both in the UK and the US. His last major hit of the period was Paul Anka’s “She’s a Lady” (1971). He fell out of fashion soon after that and mostly became a live act, singing his older hits.

Interestingly, perhaps gallingly for Jones, during that dry spell another English pop singer very much in the Tom Jones mold managed to have a very Jonesque hit. Arnold George Dorsey (b.1936) known to fans by the name Engelberdt Humperdinck, after the 19th century composer. Dorsey had had two big hits in 1967: “Release Me” (the song that kept the Beatles “Penny Lane/ Strawberry Fields Forever” out of the #1 slot, and “The Last Waltz”. Then in 1976: “After the Loving”, a song so suggestive and intimate and gimmicky it was like something straight out of the Tom Jones songbook. Frankly, when I was a kid I could not tell Tom Jones and Engelbert Humperdinck apart.

In 1979 Jones returned to TV again as the star of a show called Pleasure Cove, a clear rip-off of Fantasy Island and The Love Boat. It didn’t get beyond the pilot movie, which aired on ABC.

In 1988, at the age of 48, Jones had a surprise hit with the Prince song “Kiss” which proved oddly right for his talents. His major European hit “Sex Bomb”, released in 2000, did not chart in the US. He also made a memorable cameo in Tim Burton’s 1996 film Mars Attacks.

To learn more about variety entertainment, including variety TV, please see No Applause, Just Throw Money: The Book That Made Vaudeville Famous,