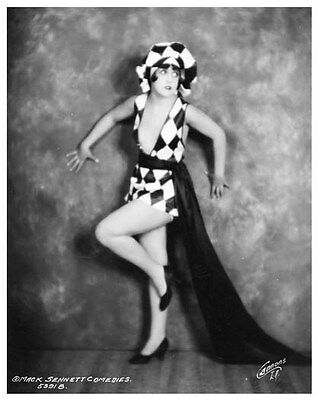 I normally don’t regard what I do on this blog as trivia. If someone was a major Broadway star for three decades a century ago, to me that’s not trivia, that’s theatre history. It’s only trivia if you regard the theatre as insignificant, and if you do, it was nice knowing you. That said, today’s post, containing a pleasant bit of information about a minor supporting player who connected to two different eras of show business…if you want to describe it as trivial, I won’t balk. But I do find this kind of cool.

The person in question is Muriel Montrose (1906-2001). Born in Denver, Montrose moved with her family to L.A. as a kid, and broke into silent movies as a teenager. After playing a bit role in the Universal film Heart Trouble (1925) with Arthur Lake and Marceline Day, she became a Mack Sennett Bathing Girl, appearing in the Sennett comedies Soldier Man (1926) with Harry Langdon, Hubby’s Little Game (1926) with Billy Bevan, and The Jolly Jilter (1927) with Ben Turpin. During these years, she also worked as Clara Bow’s body double and was a stunt woman in silent westerns.

But there is another shoe left to drop and it inevitably eclipses Montrose’s film career, which we doubtless would not have troubled you with without this more significant second act. In 1929 she married John Stephen Dow. Their son, Tony Dow was born in 1945.  Muriel was Tony’s manager during his career as a child star, starting in 1957. And his biggest role of course was Wally Cleaver on Leave it to Beaver.  And that, as Paul Harvey used to say, is the rest of the story.

For more on silent and classic film comedy please read Chain of Fools: Silent Comedy and Its Legacies from Nickelodeons to Youtube.