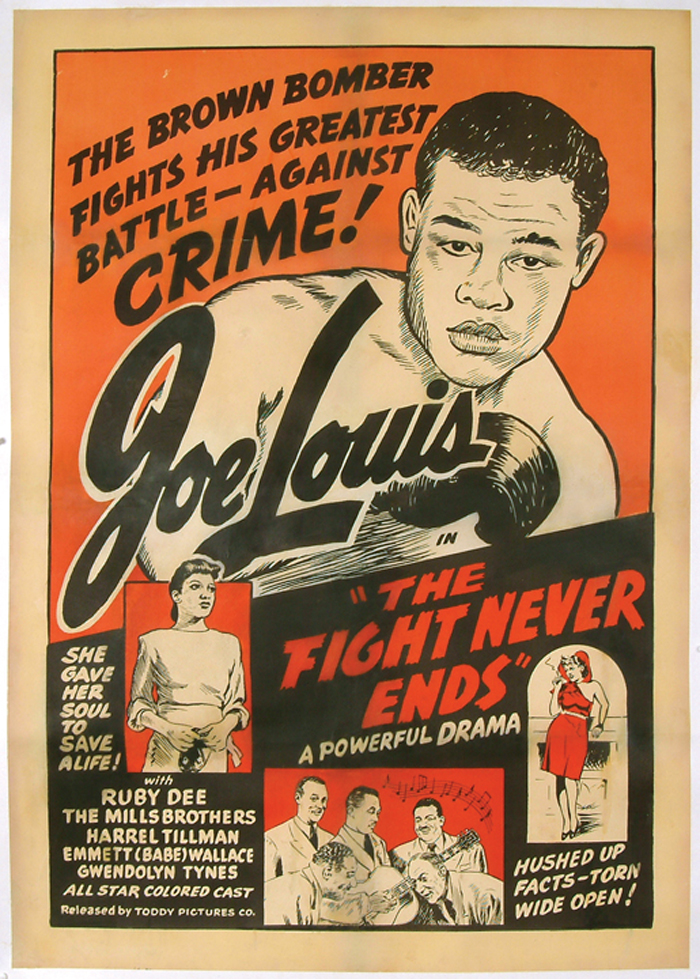 Having had many occasions to refer to the Brown Bomber Joe Louis (1914-1981), we thought it time he should rate his own post here. Unlike most of the pugilists we’ve written about, Louis came along too late to have toured the vaudeville circuits, but he did figure in movies, television, and nightclubs.

Born to a family of Alabama sharecroppers. Louis was primarily African American, the grandson of slaves, with some Cherokee and Caucasian ancestry. Louis boxed professionally from 1934 through 1951. His great fame rested on two pillars: 1) His still unbested 12 year reign as World Heavyweight champion, 1927-1949; and 2) His historic, symbolic victory against German boxer Max Schmeling in 1938, an event freighted in propaganda significance as a battle between supposedly decadent, “mongrel” Western Democracy vs. Nazi Germany. (Never a Nazi himself, Schmeling was used as a p.r. tool by the party. After the war, he worked for Coca-Cola’s German division and became friends with Louis.) Louis’s defeat over Schmeling was a sort of foreshadowing of the outcome of World War II. But his career possessed the same kind of meaning within the largely racist United States, and he became a major hero to African Americans, as he defeated white competitors like Primo Carnera, Max Baer (and his brother Buddy), Jersey Joe Walcott, and Two Ton Tony Galento. His international success thus also foreshadowed social progress of African Americans in decades to come. Louis was also the muse of artists like George Bellows and poets like Langston Hughes.

Louis was no thespian, but he was a good sport. Most of his early film appearances in the ’30s were simply newsreels of his boxing bouts. In narrative films, he usually played some version of himself. In the 1938 race movie Spirit of Youth, featuring Clarence Muse, Edna Mae Harris, and Mantan Moreland, his character’s name was “Joe Thomas” but was clearly based on his own life. He’s also in The McGuerins from Brooklyn (1942) with William Bendix; This is the Army (1943) with George Murphy; Joe Palooka, Champ (1946) with Joe Kirkwood and Leon Errol; another starring vehicle called The Fight Never Ends (1948) with Ruby Dee; and The Square Jungle (1955) with Tony Curtis. In 1953, fellow boxer Coley Wallace played the champ in The Joe Louis Story.

Such was Louis’s good luck that just as he was retiring from boxing, television was coming into its own. He made many appearances on The Ed Sullivan Show, The George Jessel Show, The Colgate Comedy Hour, The Steve Allen Show, The Jack Paar Program, Kraft Music Hall, The Pearl Bailey Show, etc Usually he would engage in simple banter with the hosts, but sometimes he would participate in comedy sketches. Later he would appear on strictly talk programs like The Mike Douglas Show, The Dick Cavett Show, The David Frost Show, The Merv Griffin Show, etc. Naturally, he was a commentator on sports programs. And towards the end he made cameos on shows like It Takes a Thief and Quincy, M.E. In later years, beset by money woes, he worked as a greeter at Caesar’s Palace in Las Vegas.

By the time of Joe Louis’s passing in 1981, the way had been paved for the man who supplanted him in the public’s eye both in the ring and on screens big and small, Muhammad Ali.

To learn more about variety history, including television variety, please see No Applause, Just Throw Money: The Book That Made Vaudeville Famous,