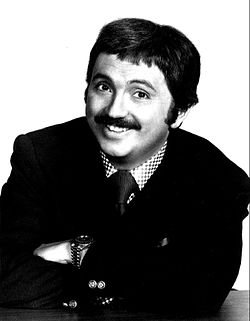 Marty Brill (b. 1932) — am I right? Brill has had his finger in many pies over the years, except the middle finger of his right hand, which he lost due to an accident, which is probably why he’s posing like that in that photo.

Originally from Chicago, he is the brother of Charlie Brill, husband of Mitzi McCall, both of whom we wrote about here. Marty was a piano prodigy, who played concerts as a child. He served in the Navy as a Japanese interpreter during the Korean War, where he met Lenny Bruce, who would be a friend and colleague for many years, and whom he would later play in a regional production of Lenny. In the ’50s Brill began performing in nightclubs as a singer/songwriter, playing guitar — long before that was a common show business niche. His first album was Marty Brill: The Roving Balladeer (1957):

He also collaborated with a guy named Larry Foster on two comedy albums. The first, The Other Family (1962) was a riff on the bestselling The First Family, only starring the Kruschevs:

In between these two records, he wrote the lyrics for a short lived 1964 Broadway musical called Cafe Crown, written by Hy Kraft, based on his earlier play, and starring Alan Alda, Sam Levene and Theodore Bikel.

In the late ’60s he began getting booked on talk and variety shows: multiple times on The Joey Bishop Show, The Merv Griffin Show, The David Frost Show, The Tonight Show with Johnny Carson, The Mike Douglas Show. This led to what may have been his most high profile gig, as a regular on The New Dick Van Dyke Show (1971-73): 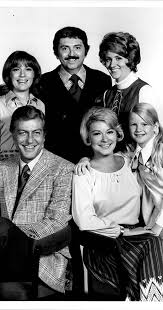 Nancy Dussault, later of Too Close for Comfort, played his wife. I love this photo — it looks like Brill is the star and Van Dyke is marginalized on his own program. Several promotional photos for the show look the same. Brill also got a nice TV Guide feature around this time, definitely the high point of his career.

Brill’s screen career lasted another 14 years. Among other things, he was on Love American Style (1973), he did a voice-over in the animated film Raggedy Ann and Andy: A Musical Adventure (1977), was a regular on The Soupy Sales Show (1978-79), did guest shots on Three’s Company (1982), Simon and Simon (1982) and Too Close for Comfort (1986) and was in the films The Pope of Greenwich Village (1984), Basic Training (1985) and Talking Walls (1987). He also wrote episodes of Carter Country and What’s Happening! After that he primarily performed live in live theatre, night clubs, resorts, cruise ships, and the like.