For Earth Day 50: Planet of the Humans 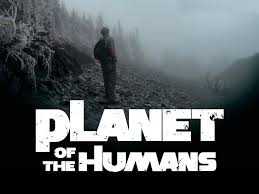 Just saw Michael Moore’s and Jeff Gibb’s new documentary about green energy. Regret to report that there’s nothing new in it. The only thing new is that the film-makers are daring to make this particular point to their mostly liberal audience.  So it’s brave and honest and clear and dispels the bullshit, and that can be rare when it comes to this literal life-or-death topic. I’ve known about the hurdles they articulate here for 30 years…that so-called “alternative energy” is about as bad as fossil fuels for the environment (indeed some of it actually relies a good deal on fossil fuels, e,g. solar panels and windmills need to be manufactured, don’t they?) and Ecosystems need to be disturbed in order to build them, don’t they?.

So the real issue is consumption. And his film does zip to answer that question. HOW to reduce consumption in a democracy. Because doing that necessitates curbing freedom to a greater extent than most people are willing to admit or acknowledge. And people tend not to vote for things that cramp their style (Oh, please, politician, take away my stuff!) “Individuals making the right choices” simply will not get the job done. Banning factory farming? Banning plastics? Conserve electricity? People won’t even wear masks in the middle of a pandemic! And yet another dilemma remains. Even the hard choice of empowering government to do these things may well be a wrong one. Draconian methods to curb consumption (in the extremely unlikely event you could unseat the power of private capital and their own, current draconian system) will likely give an amount of power to government that could be misused, used foolishly, or used with indifference to the public weal. I assure you the USSR’s record on the environment was abysmal. Chernobyl was the communist system’s MASTERPIECE of monopoly control of resources. It’s a Hobson’s choice. What this film never says aloud is that our options appear to be: Do you want your suicide fast or slow?

Check it out for yourself! It’s depressing, but you’d better know the truth. It’s free on Youtube for the next month: