The World of William Holden

There’s an unavoidable Hollywood Babylon structure to the life and death of William Holden (William Beedle Jr, 1918-1981). Not just because of his spectacularly awful, tragic-comic death, which we’ll get to, but because he spent his entire adult life as a star, and also because he starred in masterpieces of nearly every cinematic genre. I don’t think there’s an easy answer to the question “What’s the most significant and memorable William Holden performance/movie?” A well-considered short list might contain ten or a dozen films. For me personally, though, it’s not really a contest, it’s going to be Billy Wilder’s masterpiece Sunset Boulevard (1950), which brings us right back to the theme of Hollywood Babylon. And naturally this image, which is not just foreshadowing for the end of Joe Gillis, but of Holden himself:

Holden grew up in South Pasadena, screwed around in local radio, and found himself starring in a major motion picture when he was only 21 years old. 21! I love that he took his screen name from Gloria Holden, star of Dracula’s Daughter (1936), given that his predicament in Sunset Boulevard is being trapped in the clutches of a creepy movie vamp.

Ironically (given that he had little to no professional stage experience) Holden’s first starring role was the 1939 screen adaptation of Clifford Odets’ Golden Boy, a boxing yarn raised to the level of high tragedy. Never mind stage experience, he also had almost no screen appearance, just a couple of bit parts under his belt. Naturally, Holden’s casting wasn’t a fluke: he wasn’t just bright and talented, but also (in his youth) literally movie star handsome, and possessed of a fine physique (which had to be a major consideration in casting a boxer). In one significant way he was miscast: Odets’ writing, and the character’s name (Bonaparte) suggest someone urban and ethnic in the role, preferably Italian or Jewish. No one ever breathed who was more WASP-y than William Holden. He hadn’t yet got his chops, which is why this movie isn’t remembered as a classic, although he later copped to learning tons on the job from his co-star Barbara Stanwyck. Holden speaks dialogue incredibly well, which is why (despite the lack of stage experience) one of the strong genre threads in his body of work is adapted plays. In addition to Golden Boy he was also in the movie versions of Thornton Wilder’s Our Town (1940), F. Hugh Herbert’s The Moon is Blue (1953), Odets’ The Country Girl (1954), and William Inge’s Picnic (1955), which returns us to one of the themes of Golden Boy, which is William Holden with his shirt off. Later he starred in Network (1976), written and directed by the great playwright Paddy Chayefsky, which we’ll return to. 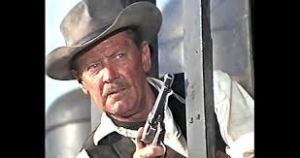 Holden is seldom thought of as primarily a western star, but he made his mark in the genre, and some of the ones he starred in would be on anyone’s short-list of important oaters. His early ones were pretty routine if well-made: Arizona (1940), Texas (1941), Rachel and the Stranger (1948), and Streets of Laredo (1949). I found Escape from Fort Bravo (1953), to be unexpectedly gripping, harrowing, climaxing with a Little Big Horn type predicament. John Ford used Holden’s screen persona brilliantly in The Horse Soldiers (1959), in which he plays a U.S. cavalry doctor constantly at odds with his heedless and reckless commander, played by John Wayne. Now that’s an interesting pair of actors to compare and contrast! Holden was always best employed as the voice of reason, surrounded by fools. I first saw Alvarez Kelly (1966) on TV when I was a kid. In that one, Holden plays a hero who is half-Irish and half-Mexican (if the title didn’t tip you off). That was sort of the rage at the time — Anglo stars playing Mexicans and Native Americans, and or “half-breeds”. Burt Lancaster, Steve McQueen, Paul Newman, and Burt Reynolds, etc all played similar roles around the same time. By this time, thanks to hard drinking and smoking, Holden’s looks were rapidly slipping. By the time of Sam Peckinpah’s The Wild Bunch (1969), he had of necessity reinvented himself as a craggy elder statesman, hard-bitten and worldly wise. It was a look that worked for him, and built on his image as the moral center of whatever scenario he found himself in. Blake Edwards’ similarly titled western The Wild Rovers (1971) took the same tack.

In 1941 Holden married fellow screen actor Brenda Marshall, a union that lasted three decades. Marshall had appeared in such films as The Sea Hawk (1940), The Constant Nymph (1943), and Whispering Smith (1946), before retiring around 1950. Interestingly, around the same time, Holden was beginning to garner a reputation in another genre, which we now call rom-coms. Meet the Stewarts (1942) had been an early if undistinguished foray into the genre. Miss Grant Takes Richmond (1949) was more significant, as it co-starred him with Lucille Ball, who later had him on a classic I Love Lucy episode (the one where he sets her nose putty on fire). His aura of the brainy, humane leading man made him perfect for Born Yesterday (1950). He fell in love with Audrey Hepburn during the filming of Wilder’s Sabrina in 1953 (though he was still married); the pair were later teamed again in Paris When it Sizzles (1965). Obviously, the ladies loved William Holden (my mother was a big fan), and so in addition to romantic comedies, he is also associated with romantic melodramas. Executive Suite (1954), for example, was an ensemble business-themed soap opera that oddly paved the way for his later roles in Towering Inferno (1974) and Network (1976).

Holden had roles in two romances about Asian women, Love is a Many Splendored Thing (1955) and The World of Suzie Wong (1960). These seem to reverberate with his associations with some of his war films set in Asia, such as The Bridge at Toko-Ri (1954) and The Bridge on the River Kwai (1957). And of course, he starred in one of the best of all World War II films, Wilder’s Stalag 17 (1953). Holden was often cast as a cynical, wisecracking American, and was often used to good purpose amongst foreign nationals against whom he could stand out. He was in many other war films, but most of them were less distinguished than these.

It’s sometimes forgotten that Holden also conquered the cop genre, though only briefly, and late in his career. He starred in the critically-acclaimed 1973 TV mini-series of Joseph Wambaugh’s The Blue Knight, about an aging beat cop who solves a series of murders. The movie was subsequently made into a series starring George Kennedy.

Like Sunset Boulevard, Holden’s major late career success, Network (1976) was a brilliant satire about show business and corruption. Holden is not yet 60 in the film but appears at least a decade older, making the contrast with his love interest Faye Dunaway both poignant and inexplicable. He keeps asserting “I’m a middle aged man” and the viewer can’t help whispering, “Really? Are you, though?” For he looked for all the world like an old man. The Dunaway relationship found its real life analog in his relationship with Stephanie Powers with whom he had connected in 1972 only a few months after his divorce. The pair were still an item at the time of his death.

Like many stars of his generation, a lot of Holden’s late work consisted of entertaining schlock, because, ya know, the Seventies. This included disaster movies like Irwin Allen’s Towering Inferno (1974) and When Time Ran Out (1980), and the appalling Damien: Omen II (1978), in which he plays the brother of Gregory Peck’s character from the first film. Holden’s final role was a part in the ensemble of S.O.B. (1981), made by Blake Edwards, with whom Holden had worked in The Wild Rovers a decade before. 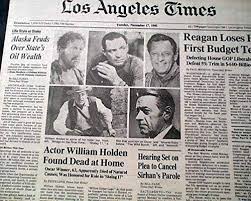 Holden’s death at age 63 was, like Sunset Boulevard, a mixture of genres: horror, show biz melodrama, true crime, and slapstick comedy. A hardcore drinker, he was seriously sloshed and alone in his apartment one night when he slipped on a throw rug and fell with such force on an end table that it rent a gash in his forehead, and drove the table into the wall. Seriously inebriated, he didn’t phone for help, but attempted to staunch the bleeding with kleenex before passing out. He exsanguinated in about 15 minutes. It’s like a scene from Charlie Chaplin’s One A.M. crossed with, I dunno, Roald Dahl’s Tales of the Unexpected.

I can’t refrain from hearing Holden’s ironic voice-over as his soul floated above the corpse. At any rate, while the event was incredibly sad, it also raises an uncomfortable possibility. While I’m sure many people have said that Billy Wilder is God, this may have been the earliest occasion on which people speculated that God is Billy Wilder.