Of Michael Ansara and Frontiers (Final and Otherwise)

Lebanese-American actor Michael Ansara (1922-2013) is notable for many things. The ledes may be that he was married to Barbara Eden from 1958 to 1974, and that he possessed one of the best, most recognizable voices in the business, up there with those of Paul Frees and William Conrad.

A lot of Ansara’s earlier parts stuck closer to his Middle Eastern identity, as in Biblical epics like Queen Esther (1948), Serpent of the Nile (1953), The Robe (1953), and The Ten Commandments (1956). And let us not forget Abbott and Costello Meet the Mummy (1955). And he played a Genie on his wife’s sitcom I Dream of Jeannie. But casting agents rapidly realized that his swarthy, handsome countenance would allow him to pass as Italians, Mexicans, South Asians, and especially Native Americans. He was Cochise on the TV western Broken Arrow (1956-58), and followed that up with the show Law of the Plainsman (1959) on which he played an Apache deputy. He was also in the western films The Comancheros (1961), and Guns of the Magnificent Seven (1969), the TV mini-series Centennial (1978), and episodes of western TV shows like The Rifleman, Wagon Train, High Chaparral, Daniel Boone,Gunsmoke, and The Virginian. 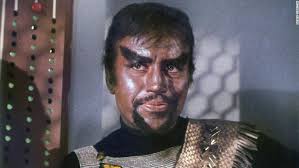 Ansara also had a good track record in sci-fi and the psychotronic. He worked with Eden on Irwin Allen’s Voyage to the Bottom of the Sea, played the Klingon Kang in several episodes of Star Trek The Original Series (and later on Star Trek: Voyager and Deep Space Nine), was also on Lost in Space and Babylon 5, and was a regular on Buck Rogers in the 25th Century. His more outre films included Dear Dead Deliliah (1972), which I wrote about here; The Doll Squad (1973), often credited with inspiring Charlie’s Angels; It’s Alive (1974); Day of the Animals (1977), which I wrote about here; and The Manitou (1977)

Most of Ansara’s last work in the ’90s was voice-over stuff on Batman: The Animated Series and by-products (videos, games, etc) thereof. His last credit was a 1999 TV movie called The Long Road Home. When he passed away in 2013 he was 91 years of age.

To learn more about show biz history, please see No Applause, Just Throw Money: The Book That Made Vaudeville Famous.