Tonight on TCM: two hit comedies by Peter Bogdanovich, both of which were hugely important to me as a kid. 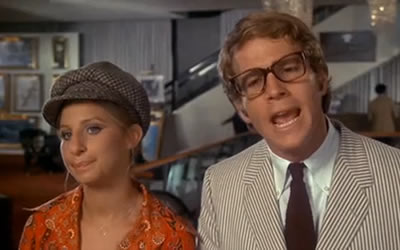 I grew up thinking this movie was the most perfect comedy of all time, and little I’ve seen in the years since has done anything to dislodge it from its perch of esteem. When I put down most post-70s mainstream Hollywood comedies (as I frequently do and will do again), and berate them as aimless and lacking in wit or apparent effort, THIS MOVIE is what I’m measuring them against, in terms of what can be attained in modern times. Every aspect: script, performance, cinematography, editing, art design, etc etc etc, contribute to a highly wrought vision that’s a roller coaster of laughs. Bogdanovich and most critics speak about it in terms of screwball comedy, and compare it to Bringing Up Baby, which was clearly Bogdanovich’s jumping off point. But What’s Up, Doc? is way more than that. The screenplay (Buck Henry, Robert Benson, David Newman) draws from farcical plot elements that go all the way back to ancient Roman comedy (all of the geometric wonder of characters mixing up four identical bags). The chase climax that makes up the film’s third act is inspired by silent comedy, especially those of Harold Lloyd, Buster Keaton and Larry Semon. A car going off a pier into the ocean? That’s straight up, literal Mack Sennett stuff. And there are musical comedy grace notes, including hard core inclusion of Cole Porter songs, sometimes sung, sometimes presented as muzak in the background.

The latter element is of course to get full value out of the movie’s top star Barbra Streisand, then fresh off Funny Girl (1968), Hello, Dolly! (1969), On a Clear Day You Can See Forever (1970) and The Owl and the Pussycat (1970). She was still almost exclusively a stage and screen comedienne (in addition to being a top pop singer); her screen career had not yet taken her to the soap opera heights (or depths) of her next few movies. For me, she is at her most appealing in this film; this is her peak as a star. In addition, her irreverent, no-boundaries character adds other elements to the film, other ways the film goes beyond screwball — her behavior calls to mind Bugs Bunny and sometimes the Marx Brothers.

Co-Star Ryan O’Neal was fresh off his monster hit Love Story (1970). He quotes the latter film’s big line in the film (“Love means never having to say you’re sorry”); Streisand’s response (“That’s the stupidest thing I ever heard”) underlines her appeal in a nutshell. (Ironically, the following year, she would star in The Way We Were, which does not take a back seat to the sudsiness of Love Story in any way, shape or form). O’Neal was destined to be the first and best of an ever diminishing line of bespectacled Bogdanovich stand-ins at the center of his comedies (later ones would include John Ritter and Rob Lowe. With hindsight the effect is like watching the stand-ins Woody Allen has been putting into his films for the past couple of decades). I recall reading a review from the period when the movie first came out, essentially castigating O’Neal for being no Cary Grant. That’s the danger of making such comparisons even when you yourself are the auteur. O’Neal’s just fine in it, and you can compare him to any number of other put-upon, mild-mannered comic heroes — Harold Lloyd again springs to mind.

The comic talents of Streisand and O’Neal are just the tip of the iceberg though. Fans of the film love it for the impeccable machinery of its large ensemble cast, a convention of comic character actors to rival the stock company of Preston Sturges. The cast includes Madeline Kahn in her first film role (MAN what a confident screen debut), Kenneth Mars, Austin Pendleton, John Byner, Michael Murphy (apparently on loan from the Altman universe), Mabel Albertson, Sorrell Booke, Randy Quaid, Graham Jarvis (of Mary Hartman, Mary Hartman), Liam Dunn, M. Emmet Walsh, and in a priceless deadpan turn as a hotel manager, the great John Hillerman (Higgins from Magnum, P.I.), whom Bogdanovich was to employ to great effect in his next film, along with O’Neal, Kahn, and Quaid.

Honestly, the thing moves like a ballet. Camera movement and the editing rhythm contribute mightily to the effect. I always think of one particular moment, when Madeline Kahn, sent to a wrong address at a highly sketchy waterfront location, comes to a door, slowly opens it, and sees two or three hoodlums frozen in the act of being about to punch some poor guy in the face. It’s a cartoon-like effect, played to a tee by all concerned, both before and behind the camera.

Set against the hilly backdrop of San Francisco, it’s easy to associate this film with another 70s comedy full of Hollywood quotation, Colin Higgins’ Foul Play (1976).

Anyway…I don’t know how many times I’ve seen this movie. 15? I’d sooner watch it again than watch some half-assed bro comedy that doesn’t achieve 3% of what this one does. As an illustration of what a delicate thing chemistry is, Streisand and O’Neal were teamed a few years later for The Main Event (1979): different writer, different director, different this, different that and zero magic. 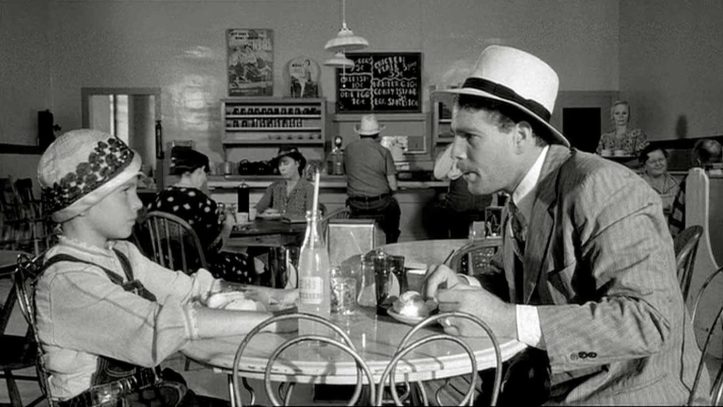 I watched this one just a few days ago after not having seen it in decades and was floored by the realization and memory of how important this movie was to me as a kid. As with What’s Up Doc? it was shot by László Kovács and edited by Verna Fields, and, while this is indeed a warm-hearted comedy, the emphasis in Paper Moon is more on realism, on realistically evoking a time and a place, the American midwest during the Great Depression. The illusion that you are really there (enhanced by the use of black and white) is terrific. My parents grew up during this era; I naturally associated Tatum O’Neal’s precocious little survivor with them. My mom was closer to the character in age, my dad was from rural Alabama, where the novel was originally set (it’s changed to Kansas and environs in the film). But the connection to my parents invested me in it.  THEY rode around in cars like this; THEY listened to radio shows like The Jack Benny Program and Fibber McGee and Molly. This movie was some of my first exposure to the pop culture of those times, laying the groundwork for so much that I came to love.

FURTHER, Ryan O’Neal plays a con artist in the film — a guy who makes his living going door to door pretending to be a Bible salesman, delivering C.O.D. goods he claims were ordered by men who recently died, and manipulating their widows into paying for them. He teaches the ropes to the orphaned daughter of his prostitute paramour, whom we strongly suspect is his biological daughter, an effect enhanced by the fact that she is played by his real life daughter Tatum, who won an Oscar for her efforts. (I read her autobiography a few years ago. She said it was all downhill after that). Anyway, I’ve always been obsessed with con men. This fictional one is surely one of the first I ever encountered in pop culture. And Madeline Kahn plays a carnival BURLESQUE dancer, surely one of the first times I ever became aware of that concept as well! And John Hillerman returns as well, this time exuding a menace you mightn’t suspect he was capable of, as twin brothers: a bootlegger and a local sheriff. Pay close attention to the teenager who plays Kahn’s African American maid Imogene (P.J. Johnson). Johnson was just a local kid who won an audition. She’s SO good, and this was her only movie.

It’s a road movie, a buddy picture, and sort of a rom-com. And I just love that last shot of the car driving towards the horizon — seems like a mash-up of The Grapes of Wrath and the end of a Charlie Chaplin film. Paper Moon would make a good pairing with Robert Altman’s Thieves Like Us (1974), I think. Bogdanovich wife Polly Platt was production designer on both films as well as What’s Up. Doc? Many think she was the key to the success of his early films, as he seems to have lost his magic feather in the films he made without her

A year after the film Paper Moon was released it was turned into a sitcom starring Christopher Connelly and Jodie Foster! But it only lasted one season.

So I dunno….these two films are important to me. Bogdanovich doesn’t always bring the magic. For example, I’ve never been able to get more than a few minutes into Nickelodeon (1976), a theoretically similar concept to these two films, also featuring O’Neal. But these two really hit my bullseye. I hope you’ll enjoy them as well!